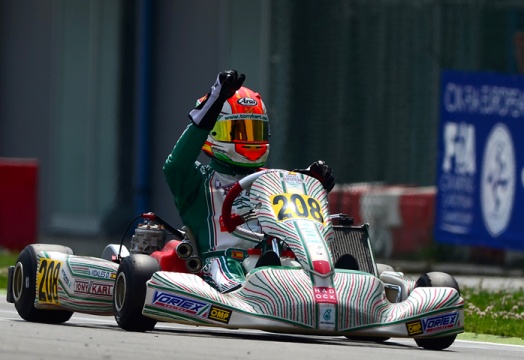 Press Release by: Tony Kart Racing Team
The weekend of the second European round for OK, OKJ and KZ2 categories was featured by changeable weather conditions that made even more exciting a tempered competition. David Vidales deservedly won in OKJ, after leading every step of the race always among the best drivers.
OKJ. David Vidales and Charles Milesi appear at the top already in qualifying and signed the second and third time, respectively. In the heats, enlivened, as mentioned, by some sudden changes from wet to dry track, Vidales finished second with two victories and Milesi with a good fifth.

Guido Moggia and Leonardo Marseglia worked hard together with the Racing Team staff to recover from unlucky qualifying and entered the final without any problems.
Vidales and Milesi became clearly competitive already in their pre-finals, finishing in second place just a short distance from the first and after being in the lead in the early stages.

So our two drivers found themselves jumping from the starting grid paired at the starting grid of the final. Vidales quickly managed to take the lead of the race, fighting against two formidable opponents, both at the wheel of chassis we produce, Jewiss (Exprit-Vortex Forza Racing Team) and Blonqvist (Tony Kart-Vortex Ward Racing).
Only in the final stages of the final our Vidales has succeeded over the rivals, directly going to the win.
Milesi finished in seventh place but got a penalty of 10", for the incorrect positioning of the front bumper, and thus was relegated in fourteenth place.
In the next two events (Portimao and Genk), Vidales has good chances to compete for the title and fight against his opponents, most of which run with OTK material, and even Milesi, eighth in the standings, is not far from the top positions.
On top of the provisional ranking there are Watt and Blonqvist, both at the wheel of a Tony Kart-Vortex, and reflect a situation that sees our chassis leaders of the European Championship for OKJ class with a presence in the final exceeding 35%. Moreover, if we also add the other brands made in Prevalle (FA Kart, Kosmic Kart and Exprit) the figure rises over 65%.

OK. Clément Novalak closed the heats in tenth place, after the third time in qualifying but was unlucky in the pre-final, and stopped immediately.
In the final Novalak got a double satisfaction, signed the best lap and also made the greatest number of overtaking, not less than twenty-three, finishing eighth.
Jean Baptiste Simmenauer recovered from the twentieth position in qualifying and closed the final eleventh.

KZ2. Our Luca Corberi and Alessio Piccini collected good points in the Adria round but, particularly for Corberi, there is the regret of having lost the leadership of the continental championship.
After the great success in Essay (France) and the sixth place obtained in the pre-final 1, expectations for another good performance were high. Unfortunately, our driver was slowed down by not perfect physical conditions.
Everything is now sent to the decisive round, the last of the championship, which will be run on the Genk circuit, in Belgium.