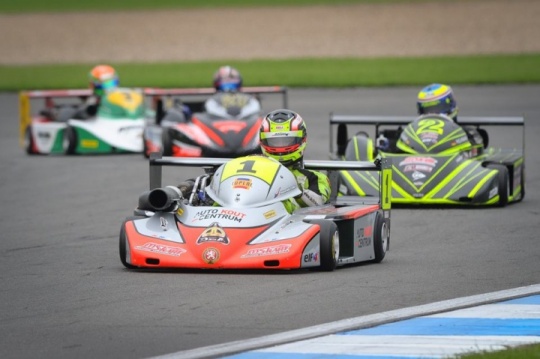 Press Release by: FIA Karting
The second Competition of the 2016 CIK-FIA European Superkart Championship took place under very mild conditions in an atmosphere dedicated to Karting. The British single-cylinder and KZ long-circuit categories shared the programme and pits with the Superkarts, with several Drivers jointly participating in two events. Lédenon was dominated by a trio while at Donington Park the circle of contenders for the podium widened to five.
Qualifying Practice was decided in the fastest first session. The Briton Liam Morley (Anderson / DEA) confirmed the impressions from Free Practice as the fastest ahead of the defending champion, the Czech Adam Kout (MS Kart / DEA) who he surpassed by two-tenths in the final moments (1'27 '' 522). The new contender, Yannick De Brabander (MS Kart / VM) was too optimistic on his first flying lap. The surprise came with the 3rd provisional time for Dan Clark (Anderson / VM). The second session allowed the the three protagonists of Lédenon (Elkmann / Kout / De Brabander) a chance to catch up, but this was not enough for the Belgian who couldn't move up further than the the 3rd row. Overall the Dutchman Marcel Maasmann (Anderson / VM) moved up behind Clark. Peter Elkmann (MS Kart / VM) improved after a shortened first session and clinched the 3rd fastest time.

The first race was very animated and as tight as could be expected. Elkmann had the best start from Kout, and De Brabander slipped past Clark, who Morley had overtaken. The five Drivers would stay in touch. A little further back, Maasmann and Vesa Lehtinen (Anderson / VM) were running together. Jason Dredge (Anderson / PVP) experienced engine trouble and a rare retirement. Clark took 3rd, and on the fourth lap Morley accelerated and overtook De Brabander. The surprising Clark passed Kout. At halfway, the fluctuating gaps tightened further and Kout quickly overtook Clark and Elkmann to take the lead. Clark gradually gave up ground, with a worn disc, and De Brabander followed by two seconds. Further back Maasmann resisted Lehtinen before the finish. Morley, the fastest on the track, overtook Elkmann and gradually exerted pressure on the leader. But the podium was frozen. Indeed, his exhaust broke on the last lap, and Morley had to be content with second place in the bumper of Kout.

The second race proved much easier for Kout. All of the leaders stayed together at the start and five protagonists began to escape in the following order: Kout, Elkmann, De Brabander, Morley and Clark. By a few lengths, Lehtinen was cruising alone in front of the chasing pack. The race was decided at the start of the third lap when Kout arrived at the hairpin before the line with a comfortable lead over his opponents, with Elkmann bringing up the rear. Kout soared to leave his rivals to fight among themselves. Morley was pulling himself out of the group and left De Brabander, Clark and Elkmann to enliven the race. It was a fierce battle, the three drivers swapping places repeatedly until Clark's retirement. Elkmann took the ascendancy, and the podium proved identical to the previous race. Far behind the leaders, Maasmann was ahead of an excellent Laurens Westerdijk (MS Kart / VM), despite their lack of competition.
In the provisional classification of the Championship, Kout (91 points and three wins) took a good option on the title before the final at Assen on 6th and 7th August, against Elkmann (73 points and only one win).

In the single-cylinder Cup, the two favourites were outperforming the clock and in the first race the Australian Jordan Ford (Anderson / DEA) won after making a long trip to experience such a battle. Gavin Bennett (Anderson / DEA) took the lead on Paul Platt (MS Kart / Gas Gas) in the second race and the standings.