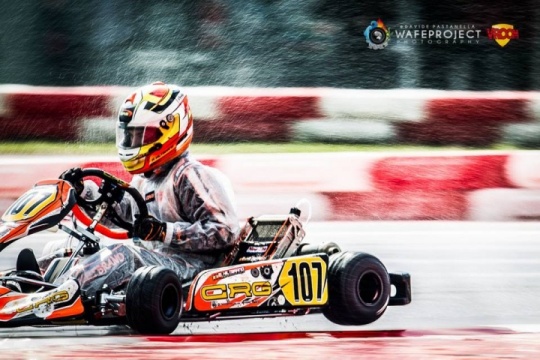 Italians round out the podium after qualifying practice thanks to the best lap of Matteo Viganò (Top Kart-Parilla) who is followed by Fabian Federer (CRG-Modena Engines) and Alessandro Irlando (Energy Corse-TM).

Italians dominate the qualifying heats with five drivers in the first six position. Pole position for Alessandro Irlando, who is constantly on podium in each manche. Second position for Matteo Viganò followed by Stan Pex (CRG-Vortex).

In the first heat Pedro Hiltbrand (CRG-Parilla) is the winner, also thanks to a lot of penalties for front fairings not in the correct position. The Spaniard is followed by Bent Viscaal (Tony Kart-Vortex) and his teammate Paavo Tonteri (CRG-Parilla). The second race is won by pole sitter Logan Sargeant, who crosses the line ahead of Tonteri and Martijn Van Leeuwen (BirelArt-Parilla). Fourth place for Lorenzo Travisanutto who gains six positions from the starting grid.

At the end of the qualification heats is the Finn Tonteri who grabs the pole position for the prefinal, strating ahead of Logan Sargeant and Bent Viscaal.

A special mention goes to Ben Hanley (Croc Promotions-TM) who is unable to race because of a broken rip which hurts him.

Between the youngest driver is Dennis Hauger (CRG-Parilla) who leads since the qualifying session over Bin Abdul Gafar Mizzudin Musyaffa (DR-TM) and David Vidales (Tony Kart-Vortex).

After ten heats, finally Hauger grabs the pole position for the prefinal race, thanks to one win and three second place. Second position for David Vidales, who gets the better of the championship leader Noah Watt (Tony Kart-Vortex).