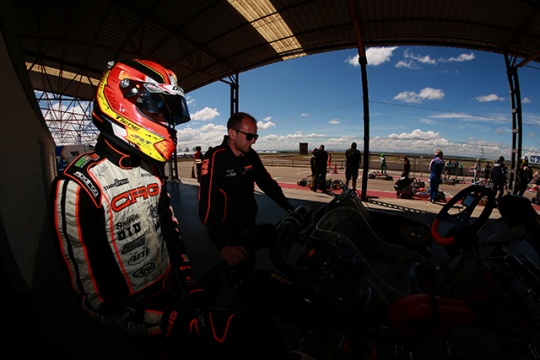 A LOT OF CRG DRIVERS IN KZ2

KZ2 will be at its second round of a season that already kicked off in Essay. CRG works team will feature Fabrizio Rosati, the Japanese Fuma Horio and the American Sting Ray Robb, all on CRG-Maxter, while the Portuguese Yohan Azedo Sousa will make it to the track on Zanardi-Parilla.

Several other drivers will be representing CRG colors. Starting from Fabian Federer, who was second in Essay, the Estonian Kaspar Kallasmaa of SRP Racing Team, the strong Dutch Stan Pex who has been shining in Essay alongside the Swedes Benjamin Tornqvist and Andreas Johansson of CRG Holland, the Spanish Oliver Enrico Prosperi of Renda Motorsport, Dylan Davies of CRG Keijzer Racing and the German Dominik Schmidt of TB Motorsport.

Hopes to counter charge in OK after the partial disappointment of Zuera with victory ambitions, will be on Felice Tiene, on the Spanish driver Pedro Hiltbrand, and on the strong Finn Paavo Tonteri, all on CRG-Parilla. To be followed also the British Tom Joyner, on Zanardi, who has been among the main protagonists of the first round in Zuera.

A good number of CRG drivers will be present also in OK Junior. The more and more competitive Norwegian Dennis Hauger has been among the absolute best in the recent WSK race of Adria and will be joined among the CRG lot by the British Teddy Wilson, the Brazilian Gianluca Petecof, the French Pierre-Louis Chovet, the Canadian Antonio Serravalle, the German Esteban Muth, who has been among the best in the round of Zuera, and his brother O’neill Muth. Morsicani Racing will also line up Andrea Rosso, and X-Rei Motorsport Tara Eichenberger.

Live Timing, TV Live Streaming and all results will be available at www.cikfia.com