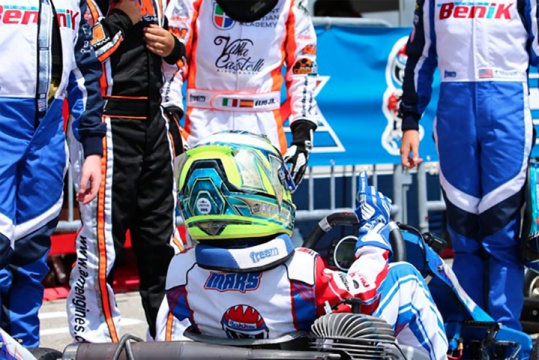 Press Release by: Benikarts
Luca Mars wins in BENIK Kart debut!
With an already outstanding driver lineup, Team BENIK only got stronger with their most recent edition. Debuting aboard a BENIK Kart and taking home the victory at the most recent ROK Cup Florida event at the Homestead Karting facility, Luca Mars has officially joined the Fort Lauderdale, Florida based squad and will compete in multiple series throughout the remainder of the 2016 season.

“We are very happy to have Luca and his family join Team BENIK,” explained Team Manager Nick Mitchell. “He has always been a threat at each event, and a driver that we have had our eye on. We are glad that he is now in our corner as he is a valuable asset to the team.”

Joining the team for a test and race weekend in South Florida, Mars made an immediate impact by scoring the pole position. Running consistently through the heat races and prefinal, Mars made good in his debut with the team and topped the blocks to take the overall victory in the Vortex Mini ROK class.

Mitchell continued, “Luca will compete in several national level series and we are confident that he will build upon his already impressive resume within our program.”