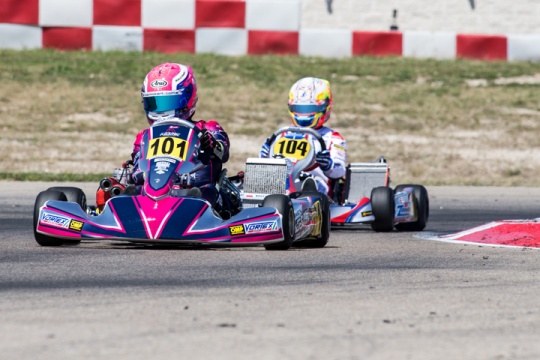 Press Release by: FIA Karting
The circuit of Adria (I) hosts the European CIK-FIA Karting Championship, with its second round of the OK, OKJ and KZ2 categories. The races at the weekend of 5th June live in streaming on www.cikfia.tv and www.cikfiachampionship.com. The following week, the special report on Motors TV.
Second Championship’s round at the Adria Karting Raceway for OK, OKJ and KZ2.

The European karting season moves to Italy, where the circuit of Adria (Rovigo) is about to host, next weekend, the second round of the European CIK-FIA Championship of the OK, OK Junior and KZ2 categories. The first two categories made their debut two weeks ago in Zuera (Spain), whereas the KZ2 had its season-opener last month in France, in Essay. All the 177 entrants will play a leading role in the brand-new Adria Karting Raceway, in an event promoted by CIK-FIA. The facility was opened two seasons ago and, so far, it has mainly hosted WSK events: last week, for example, it was the venue of the final round of the WSK Super Master Series. After the recent race in Adria, the drivers taking part in the European Championship are well prepared and eager to battle on the 1302 metres of the north Italian track. Forecasts say that the weather will be hot, as hot as the one we had during the races one week ago.

The duels in Adria live in streaming.

The appointment is on the Internet, to watch every moment of the final phase. The streaming - produced by WSK Promotion - will start at 11:20am on Sunday 5th June. As usual, images will be available on cikfia.tv and cikfiachampionship.com, starting with the drivers’ parade, followed by the Pre-finals and Finals of the three categories. The following week, on Motors TV, the usual special report with a recap of the whole weekend.+

The protagonists of Adria.

The Polish Karol Basz (Kosmic-Vortex-Vega) had a good start in the OK: he gained the lead of the category thanks to his victory in Zuera. He is the driver to beat, after his win in last week’s race in Adria, but do not forget to keep an eye on the more and more consistent Spanish driver Marta Garcia Lopez (EvoKart-Parilla), who can aim at a great result starting from her second place in the standings. In the OK Junior, the Danish Noah Watt (Tony Kart-Vortex-Vega) arrives in Adria as the category leader but, behind him, the Brazilian Caio Collet (BirelArt-Parilla), last week’s winner in Adria, is ready to attack. In KZ2, the lead of the Championship is held by the Italian Luca Corberi, followed by the French Paolo Besancenez (both on Tony Kart-Vortex-Vega). There is only one point between the two: a further proof of the high level of uncertainty of the category, which has only one more round in schedule, next July in Genk (Belgium).