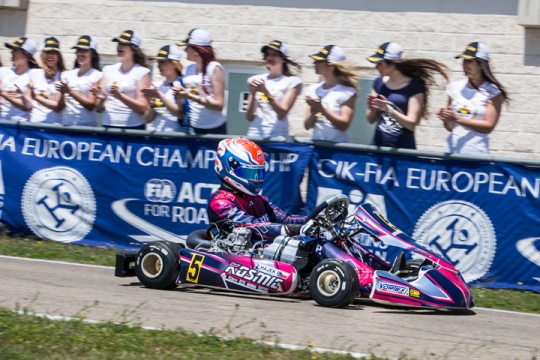 Press Release by: FIA Karting
After the round in Zuera (E), the CIK-FIA European Championship’s leaders are Basz (OK - Kosmic-Vortex), Watt (OKJ – Tony Kart-Vortex) and Ardigò (KZ – Tony Kart-Vortex). Many appointments on TV next week with the special report from Zuera on Motors TV.
Standings change in the Championships.
After the round in Zuera, the European CIK-FIA Championship marked the debut of the OK and OK Junior categories, which awarded their first points to the participants. Next appointment in Adria (Italy) from 2nd to 5th June. In Zuera the Championship was hosted by the circuit set on the hills of Aragon, while in Italy the venue is the facility on the plain by the Adriatic sea: drivers and teams will test their potential in completely different conditions. On the other hand, the KZ category has its final appointment in Genk, at the weekend of 31st July. The finale in Belgium is going to be unpredictable, given the narrow gaps at the top of the standings.

The recap of the European Champs in the special report on Motors TV.
Highlights from Zuera on Motors TV on Monday 23rd and, in the following days, reruns on the network channels Europe, France, UK and North America.

Ardigò is the KZ leader but his opponents are close.
The Czech Patrik Hajek (Kosmic-Vortex-Vega) tried hard to close the gap with the Italian Marco Ardigò (Tony Kart-Vortex), the KZ leader since the season-opener, and eventually he hit the target. Hajek, in fact, is now third in the standings, only 4 points behind Ardigò, thanks to his terrific performance in Spain. Excellent performance also for the French Jeremy Iglesias (Sodi-TM), who keeps his second place behind Ardigò – who leads with 84 points – trailing by only two points.

Basz back at the top in OK.
The Polish Karol Basz (Kosmic-Vortex-Vega) managed to recover in OK, after the first stage of the round had been dominated by the English Tom Joyner (Zanardi-Parilla). At the end of the Final won by Basz and where Joyner was dogged by bad luck, the Polish hoisted himself on top of the standings with 47 points. Behind him, trailing by only 8 points, the Spanish Marta Garcia (EvoKart-Parilla), very consistent and always in the top positions throughout the whole weekend and third in a breath-taking Final. Thanks to his outstanding performance, the Dutch Bent Viscaal (Tony Kart-Vortex) is third with 33 points, with the Danish Christian fourth and only one point behind. Lundgaard (Ricciardo-Parilla), the runner-up of the Final, did not score any points in the heats.

Watt pulls away in OKJ .
Noah Watt (Tony Kart-Vortex-Vega) is the first driver to try to pull away in OKJ: the Danish, in Spain, achieved the highest possible score, winning Pre-final, Final after the best results in the Qualifying Heats. Watt leads with 52 points over the Brazilian Caio Collet (BirelArt-Parilla), who managed to close the gap and finish second in the Final, scoring 40 points. Same score and second place also for the Swedish Isac Blomqvist (Tony Kart-Vortex), who was always among the top drivers in Zuera and finished third in the Final.