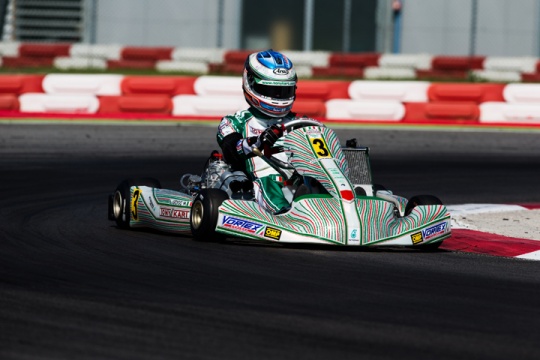 Who can stop Marco Ardigò? Apparently nobody because the Tony Kart ace dominates flag to flag the fourth event of the WSK Super Master Series. Davide Forè tries to put pressure on the leader, tailing him in the beginning of the race, but Ardigò is simple unstoppable and takes home race and 2016 title. Third place for Jeremy Iglesias who forces Patrik Hajek to go wide while the Cezch driver is triying to resist to his attacks.

Between the KZ2 the race winner is Leonardo Lorandi, who wins over Francesco Celenta and Alessio Piccini.

Karol Basz starts greatly keeping the leadership of the race, while tailed by Marta Garcia Lopez. The leader exploits a duel between Garcia Lopez and Joyner, opening a small gap. Tom Joyner has a problem and starts losing positions, leaving the third place to Lorenzo Travisanutto. The Brit will retire during the eleventh lap. Marta Garcia Lopez challenges Basz using fastest laps as weapon, but the reigning World Champion is able to respond to the lady, winning the race. The third place for Travisanutto is enough to win the title.

Cajo Collet and Denis Hauger lead the race after the green flag over Sami Taoufik, Fin Kenneally and Ulysse De Pauw. The gap between drivers starts opening, but Collet begins a fierce battle for the lead with Hauger and Taufik. Under the chequered flag Collet thumbs the air winning over Hauger and Taoufik who wins the title.

Jose Antonio Gomez grabs the leadership of the race immediately after the green flag, leading the race over the poleman Francesco Pizzi and Michael Paparo. The leading trio starts switching positions, helping Roman Stanek and Luigi Coluccio to catch them. From the lap seven Pizzi slows down the pace, so the fight for the lead is a question between Paparo and Gomez, and the Italian will be the winner over the Spaniard. Coluccio rounds out the podium.