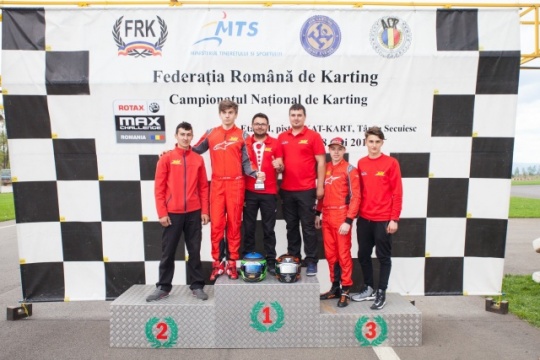 Press Release by: DR Racing Kart
The first round of the Romanian National Championship shows JMS Performance drivers on top: Aldin Opran wins the KZ2 whilst Matia Curuia signs another consistent performance in Mini.
Skat Kart facility hosts another strong weekend for the team led by Jacques Iancu and its DR Kart chassis.

During the first round of the Romanian National Championship, talented Aldin Opran shows the way in KZ2 from the top spot since Saturday, when he sets the fastest time grabbing the top spot after qualification heats. On Sunday he has to settle for the second place in race one, but he is able to wreak revenge winning the second race.

In Mini young Matia Curuia starts the weekend with a third place in qualifying session, but he is able to gain another position during qualification heats starting from the second place the first race. Unfortunately an accident pulls him away from the fight for the lead, but he is author of a great comeback in race two when he starts from the twelfth place, finishing just under the podium in fourth position.