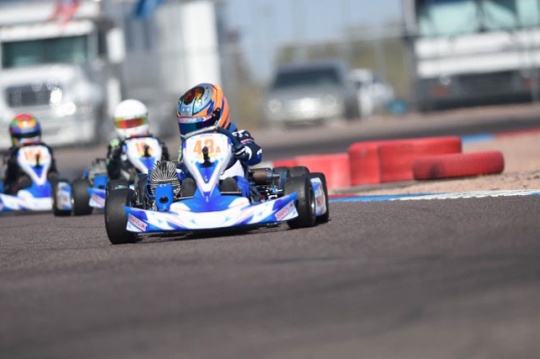 Press Release by: Benikarts
SKUSA SpringNationals winners in Micro, Mini and Junior
Making the cross-country trek from their home base of Fort Lauderdale, Florida to the Phoenix Kart Racing Association (PKRA) facility in Glendale, Arizona, Team BENIK would have one of their best weekends of competition ever during the opening round of the SuperKarts! USA (SKUSA) Pro Tour. Taking home four victories and eleven podium results, BENIK Kart drivers swept the victories in both the IAME Micro and Mini Swift classes.

“What a great weekend for Team BENIK and the BENIK kart product line,” explained Team Manager Nick Mitchell. “It is never easy competing on the national level but our whole team stuck together and proved that we are the ones to beat in multiple different classes.”

In the IAME Micro Swift class it was the British duo of Oliver Denny and Brandon Carr that would steal the show as the pair would battle it out all weekend long. Denny would get the best of the field in Saturday’s wheel-to-wheel action scoring the victory while Carr would cross the line in third. Sunday would see Carr on the point as he drove to victory with Denny making his second podium appearance of the weekend in the second position. Elliot Cox would make it three drivers in the top three as he drove to a third place finish on track but a penalty assessed for a last lap pass would relegate him down the running order. With their total domination of the class, Frankie Mossman would join Carr and Denny on the podium to make it a BENIK Kart 1-2-3.

In the IAME Mini Swift division, it was much of the same for BENIK Kart drivers as they littered the front of the field. Diego LaRoque, fresh off his US Open Rotax Micro Max victory, stole the show Saturday and claimed the victory while Jace Jones made it another 1-2 finish for BENIK. Sunday would see Tyler Maxson rise to the top of the field as he secured his first SKUSA Pro Tour victory of 2016. LaRoque would make his second trip to the podium in as many days and third in as many races with a third place effort while six of the top eight karts would carry the familiar BENIK Kart logo.

Deciding on Tuesday of the event week to make the trek from the UK to Phoenix, SKUSA SuperNationals champion Jonny Edgar would throw his hat into the mix in X30 Junior. Not even registered for the event until Thursday morning, Edgar hit the track with speed and proved to be one of the top junior drivers right out of the trailer. Saturday would see the talented pilot qualify in the second position and though he ended the main event in sixth, showed speed at the front of the field.

Mitchell continued, “Jonny was fast on Saturday but contact with another competitor during the rain shortened final saw him fall down the order. Sunday would be better for the future motorsports star and I have a feeling he will be a major player in the 2016 SKUSA Pro Tour championship chase.”

Back to the track Sunday, Edgar would nearly repeat his qualifying performance in the X30 Junior class with a third place effort before winning both of the daily heat races. Starting on the inside of the front row for the main event, Edgar led early but would fall back to third before the final checkered flag flew. On the strength of his results, Edgar left the opening round of the 2016 SKUSA Pro Tour as the overall point leader and weekend winner of the SKUSA SpringNationals.

For more information on BENIK Kart, please contact Nick Mitchell or Ben Cruttenden via e-mail to Info@Benik-Kart.com or by phone at 754.206.4870. For all West Coast Sales, please contact Nash Motorsportz at 951.233.3431 or via email to nashmotorsportz@yahoo.com or through their Facebook at www.facebook.com/pages/Nash-Motorsportz/302987366497945. Kartworkz is also an authorized BENIK Kart dealer and will be servicing the Northeast region of the country. Please visit them online at www.Kartworkz.com or contact Jerry White at 570.237.1095.