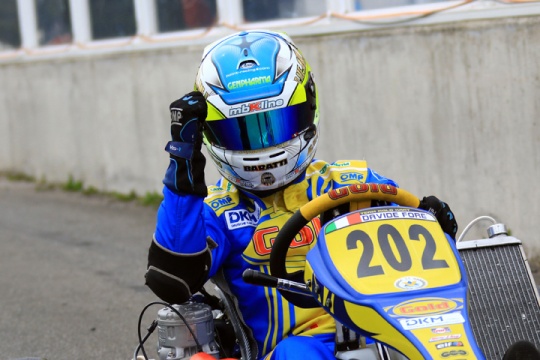 Press Release by: DKM
The German Kart Championship had a sensational start into the season last weekend in Wackersdorf. 140 drivers started at the Prokart Raceland Wackersdorf and showed thrilling races. More than 50.000 spectators followed the events live on the internet.
The German Kart Championship started last weekend. The kick-off to the new season took place in Wackersdorf (Upper Palatine).With 140 drivers from 23 nations the four DMSB grade series experienced a strong upturn. The DMSB Shifterkart Cup is new this season. Next to the German Shifterkart Championship (DSKM), the cup is the second league of German shifterkart racing and experienced a strong response and is filled up to the last spot with 34 registrations. The other classes are brilliantly manned as well, with drivers such as Ardigò, Forè, Pex and Basz raising the level of the competition. Moreover the Prokart Raceland Wackersdorf was freshly asphalted and caused a lot of joy for the drivers.

The track provided a lot of racing action. There were multiple winners at the eight final races. Only Max Tubben achieved a double success at the DSKC and is now leading the championship. Next to him, Charles Milesi (DJKM), Jorrit Pex (DSKM) and Paavo Tonteri (DKM) travelled home as the leading drivers. The German Kart Championship is going to continue from June 10th – 12th. The southernmost station of the racing calendar awaits the drivers – the Schweppermannring in Ampfing.

DJKM: Victories for Linty and Milesi

Guest driver Etienne Linty (Emila Kart) achieved the best start into the weekend at the juniors and secured the lead in a narrow qualifying – 38 of the overall 46 drivers ended up within a second of each other after qualifying. The heats weren’t any less spectacular: Charles Milesi (Tony Kart Racing Team), Charles Weerts (Kosmic Racing Departement) and Dennis Hauger (CRG Holland) won a heat each. In the end, Frenchman Milesi was the front driver in the evening and started into the first final race from pole position.

During this, Linty showed strong nerves. Right after the start, the Italian rookie took the lead and defended it confidently during the course of the race. Despite some hard attacks he kept his opponents behind him and won the race. Pole-setter Milesi was able to fight his way forward again to second place. Dennis Hauger (CRG Holland) followed on third place.

The second final race of the youngsters started as a big chaos. In the first bend more than half of the field collided and caused a race termination. Biggest victim was kick-off winner Linty – as one of two drivers he wasn’t able to continue the race and had to watch as Milesi drove to a clear victory. Behind him things didn’t calm down though – up to five drivers fought for the top ranks. Dennis Hauger (CRG Holland) finally crossed the finish line on the second place, but a time penalty threw him back to eighth position. New second winner was Vidales in front of Petr Ptacek (Formula R Racing Team)

Brothers Jorrit and Stan Pex (CRG Holland) defined the picture of qualifying at the German Shifterkart Championship and also drove among the front during the heats. In the end, Jorrit Pex won both of his heats and defended his top position.

From pole position, Pex also won the start into the first ranked race. His opponents put a lot of pressure on him from behind though and passed by the Dutchman. Davide Foré (Gold Kart Racing Team) and Patrick Hajek (Kosmic Racing Departement) fought for victory, which caused a small collision. Pex and Marco Ardigo (Tony Kart Racing Team) used this and passed them by. The hoped-for duel between the two world champions didn’t happen though. Ardigò had to end the race a couple of laps before the end due to a technical defect. The road was therefore clear for Pex who achieved his first victory of the season. Foré ended up on second place in front of Finn Simo Puhakka (CRG Germany).

After the lost victory at the first race, Foré evened out the balance of power during the second race. Due to a strong performance he drove back to the front and defended his position throughout the course of the 21 laps. At the finish line, the Italian’s joy was huge. The fight for second position was a lot narrower. Stell put pressure on Pex, who kept his nerves and stayed at the front despite an attack, winning the second place.

At the premiere of the DMSB Shifterkart Cup, Austrian Christoph Hold (Maranello Kart) achieved the first pole position and defended this throughout the heats. But young Dutchman Max Tubben (CRG Holland) already got dangerously close to him during these. Just like Hold, he achieved a victory and a second place.
A group of three made up of Hold, Symen Wiggers (CRG Holland) and Tubben immediately drove away from the rest of the field during the first race. During the course of the race, Tubben had the most resources though and was able to break away. With a considerable advance he crossed the finish line on first place. While Hold defended his second place, Wiggers fell back to eighth place. Best German driver was Maximilian Paul (NKS for Racing) on third place.

Just like at the first race, Hold won the start and seemed to have everything under control up to the middle of the race. Tubben wasn’t so easily shaken off though and prevailed again in the end. During a great maneuver he passed by the leading driver and achieved his second victory in a row. After Hold, Tobias Mähler (Kartshop Ampfing) followed on third place

Even though only 19 drivers started at the DKM, the field impressed with its high quality. Finn Paavo Tonteri (TB CRG Racing Team) set the best time during qualifying, and he also won both heats.

He confirmed this during the first final race on Sunday. Jean-Baptiste Simmenauer (Tony Kart Racing Team) initially took the lead in front of his OTK-brand colleague Karol Basz (Kosmic Racing Departement) and Clement Novalak (Tony Kart Racing Team). Tonteri kept close though and took back the lead six laps before the end of the race. He was unstoppable then and crossed the finish line as the winner with a considerable advance. Things didn’t calm down behind him though – up to the end of the race the drivers fought for the remaining positions. First pursuer was Basz in front of Simmenauer, Novalak and Noah Milell (JP Racing).

Kosmic kart factory driver Basz struck at the second race. Only on fifth place after the start, he worked his way forward due to thrilling maneuvers and celebrated his first victory of the season. Right behind the Pole was British Novalak, who put Paavo Tonteri on the third place in the end.