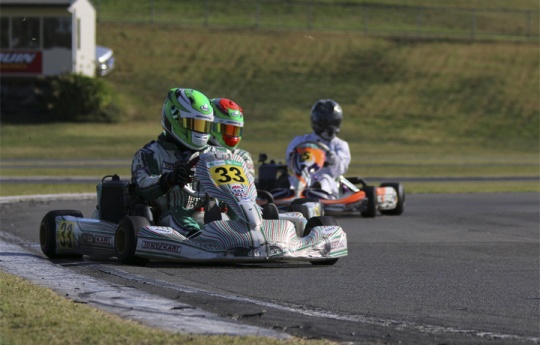 Press Release by: KartSport New Zealand
Wins don't come much sweeter than the one young Palmerston North karter Jackson Rooney claimed at the final round of the 2015/16 Bayley's Goldstar Series in the Hawke's Bay on Sunday. By claiming a fourth Vortex Mini ROK class win in as many rounds Rooney did what no one else - Senior or Junior - could manage this season, claim a series' class title with a perfect - 240 point - score.
He did it in style too, winning three of the five heats and finishing second in the other two, despite the best efforts of reigning class South Island champion, William Exton from Picton, and New Plymouth ace Thomas Boniface (the other two heat winners).

Still had his work cut out in the 125cc Rotax Max Light class, the result going to countback after recent Junior class graduate Jacob Cranston from Palmerston North also ended the day with two wins and two second places. Third on the day and second overall as far as the series goes was another Manawatu karter, James Higgins, with Ethan Hourigan from Wellington fourth on the day and third overall.

Top female driver Rianna O'Meara-Hunt also ended up tied for the top spot on points in the Formula Junior class - in her case with local driver Frank May - and stayed that way when even a countback couldn’t split the pair.

Fifth and sixth respectively at their home round were two youngsters with familiar surnames, Ronan (son of Bathurst winner Greg) Murphy and Zac (son of former two-time NZ Formula Ford champion the late Ashley) Stichbury. The results topped off a great Bayley's Goldstar series for the pair who also finished fourth (Murphy) and fifth (Stichbury) in the series points standings.

As well as a joint round win, O'Meara-Hunt also won the standalone Junior Grand Prix race - from Tom Greig, Ryan Wood and Ronan Murphy - and lowered the class lap record at the track.

The other big tie - this time in the series' points standings - came in the 125cc Rotax Max Heavy class, where Brendon Gridley from Nelson and Ashley Higgins from Palmerston North claimed one round win, three second places and a third apiece to finish on 233 points.

Each round had a different class winner - Higgins, Kevin Barker, Gridley and Zach Zaloum - with Hawke's Bay ace Zaloum, who only contested his 'home' round this season, the dominant figure on Sunday with four heat wins and a second place.

It was Sharp who won the Cadet ROK Grand Prix, though, this time from Manson and Sceats, and in so doing sewed up the series' class GP title with 196 points, four more than second placed Sceats and 10 more than third placed Mason Potter.

In Open, meanwhile, Daniel Rine from the Manawatu led home club mate Clint Beaumont on Sunday, the pair also finishing first and second in the Senior Grand Prix and Grand Prix series' points standing, while Braden Parsons won three of the five heats and the standalone class GP to claim 120 ClubSport honours on the day.

Series-wise, however, Parsons was pipped by clubmate Brent Hickmott (who finished third in Hawke's Bay) by just three points with Brenden Print third.

It is now the turn of the KartSport Taranaki club to host the 2015/16 Bayley's WPKA Goldstar series' standalone 'Championship' round at Waitara's Todd Energy Raceway on Sunday June 05.