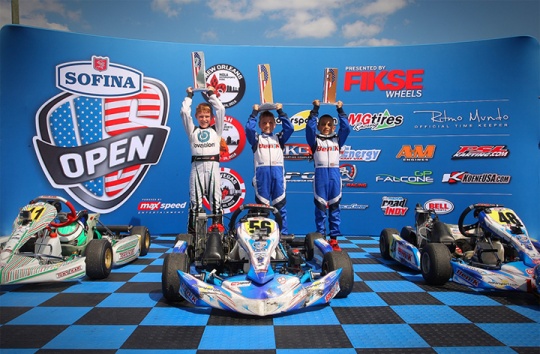 Press Release by: Benikarts
BENIK Kart lead every official on track session all week long.
Three different drivers on the same brand of chassis were the class of the Rotax Micro MAX field at the opening round of the MAXSpeed Entertainment promoted US Open this past weekend at the NOLA Motorsports Park just outside of New Orleans, Louisiana. Diego LaRoque, James Egozi and Carson Morgan all took a turn at the front of the talented field of drivers and at the end of the week, would be the only three to have their names shine in Micro MAX.

“We had three drivers with two different teams with different engine builders at the front of the pack,” explained BENIK Kart Co-Founder Nick Mitchell. “Week in and week out our brand is proving to be at the top in the North American karting scene and we will look to do it again this coming weekend at the opening round of the SuperKarts USA (SKUSA) Pro Tour.”

Racing out of the Koene USA stable, Carson Morgan would put his BENIK chassis at the front in qualifying, scoring the quick time of the Friday afternoon session. Later that afternoon, the young gun from Southern California would take the first heat race victory with a last lap, last corner pass on fellow BENIK driver Diego LaRoque.

James Egozi, racing out of the Team BENIK tent, would solidify his position at the front of the field on Saturday as he scored two heat races wins for the BENIK brand while teammate LaRoque would add another.

With only a warmup session and main event on Sunday, BENIK Kart would see two drivers end their day on the podium. Diego LaRoque led a train of five karts midway through the Rotax Micro MAX main event and eventually score a commanding victory as the second to fifth place drivers began a fierce battle. James Egozi would stand next to his Team BENIK teammate scoring a third place result while Carson Morgan would end his weekend in fourth.

Manuel Sulaiman flew the Team BENIK banner in the Rotax Junior US Open division performing well throughout the weekend. When the final checkered flag had flown, Sulaiman was able to stand on the podium in the second position.

Switching their focus from the Rotax powerplant to IAME, Team BENIK will travel across the country to Phoenix, Arizona for the opening round of the 2016 Superkarts! USA Pro Tour. With a strong ten driver team, BENIK Kart competitors will look to continue their success in IAME Micro and Mini Swift this weekend.

For more information on BENIK Kart, please contact Nick Mitchell or Ben Cruttenden via e-mail to Info@Benik-Kart.com or by phone at 754.206.4870. For all West Coast Sales, please contact Nash Motorsportz at 951.233.3431 or via email to nashmotorsportz@yahoo.com or through their Facebook
at www.facebook.com/pages/Nash-Motorsportz/302987366497945. Kartworkz is also an authorized BENIK Kart dealer and will be servicing the Northeast region of the country. Please visit them online at www.Kartworkz.com or contact Jerry White at 570.237.1095.