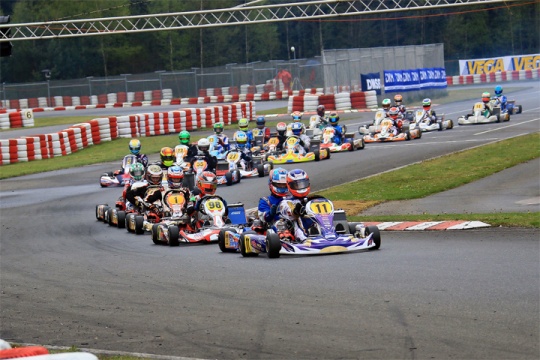 Press Release by: DKM
The German Kart Championship is going to start into its new season in a few days in Wackersdorf (Upper Palatine). The four classes are internationally strongly manned with more than 145 drivers and promise exciting races. All events are going to be broadcast via online-stream again.
The wait is coming to an end: Next weekend the German Kart Championship is going to start again. The highest German kart racing series is very popular and strongly manned in all classes. All in all, 147 drivers from 22 nations are going to start in the four DMSB grade series.
Just like last year, the kick-off is going to take place at the Prokart Raceland Wackersdorf. During the last weeks the 1.222m long track got freshly asphalted and is presenting itself shiny and new right on time for the start. The track in Upper Palatine belongs to the most modern on the racing calendar and is very popular among the drivers. “The track has a good mix of fast and slow bends, which makes a good balance between chassis and engine very important”, explains the DKM champion of 2014, Martijn van Leeuwen.

Following the CIK-FIA engine regulations, the DKM and DJKM start with new OK engines. Without a clutch and with less electronics they’re going “back to the roots”. In the DKM, 20 drivers registered for the new season. Among them are the current kart world champion Karol Basz (Kosmic Racing Department) from Poland and the reigning DJKM champion Bent Viscaal (KSM Schumacher Racing Team). All in all, the quality of the field is very high: The best teams of Europe are sending their drivers – the factory teams of Tony- and Kosmic-Kart as well as the KSM Schumacher Racing Team, CRG TB Racing Team, CRG Keijzer Racing Team and RB Racing.
The juniors are going to tie in with old times. The youngster racing series is on a high level, counting 49 drivers. While last year’s favorites rise up, new drivers are now counting on their chances. Surely among the favorites is Tony Kart-front driver David Vidales (KSM Schumacher Racing Team) from Spain. In the end there are going to be up to 10 or 15 drivers with justified chances of winning the title.

The DMSB Shifterkart Cup is new this season: In addition to the German Shifterkart Championship, the cup is going to be the “second league” of German shifterkart sports. The interest of drivers and teams is pleasingly strong. The class is completely filled up with 34 drivers. In addition to numerous experienced drivers, a lot of youngsters also want to use this chance to gather first experiences in a shifterkart. Maximilian Paul (NKS for Racing) and Marco Pfaff (KKC Racing Team) are switching from the junior class to the gear karts.

Strong media presence at the German Kart Championship
For the fifth year already, kart racing fans from all over the world can look forward to thrilling images. On Saturday and Sunday, the DKM is going to broadcast all events live via video stream at www.kart-dm.de. Additionally, the car-, engine- and motorsport-channel MOTORVISION TV is going to report about the racing events after every weekend in a 30-minute highlight-show. The recapitulation of Wackersdorf is going to be broadcast on May 15th at 8:15am.