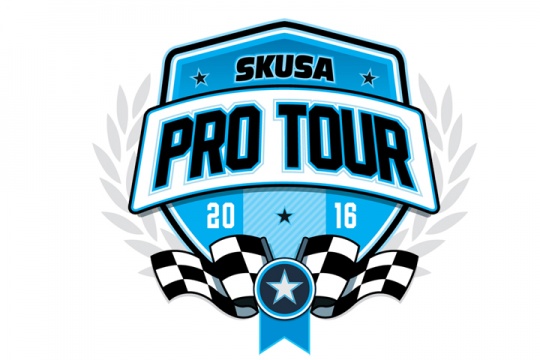 Press Release by: SKUSA PRO TOUR
Final seven days to pre-register for PKRA event, CBS Sports Network television coverage and prize package confirmed.
The 2016 season is set to begin with a bang for the Superkarts! USA’s Pro Tour national series. The 2016 SKUSA SpringNationals will take place April 29-May 1 at the Phoenix Kart Racing Association in Glendale, Arizona. Nine categories are set to battle in the seventh annual event, beginning the SKUSA Pro Tour competition that includes a return visit to Indiana for the SummerNationals and a 20th anniversary celebration of the SuperNationals this November.

It all begins at PKRA. Pre-Registration has been open for just over a month, with entry numbers surpassing 200 to date, the pits overflowing, and multiple classes on the verge of selling out at the 40-entry cap. Space still remains in all nine categories at the moment, but that is changing daily – with the pre-entry deadline of Sunday, April 24 at 11:59pm PDT looming. Drivers planning to attend this exciting event can register via the www.skusastore.com online link up until this coming Sunday at Midnight (unless their class sells out prior). Those unable to pre-register have an opportunity to sign-up trackside in available classes only beginning Thursday April 28, with race entry fees increased to $500 (currently at $395 for the two headline divisions and $350 for all others). Reserved pit spots are also a must, as SKUSA struggles to fit in all competitors registered to date.

One of the highlights from the 2015 season included the expansion of Superkarts! USA and karting in general into the television spectrum. The entire SKUSA Pro Tour season was filmed and broadcasted on the CBS Sports Network, taking coverage of the series and the sport beyond North America and through motorsports channels into Europe, South America and Australia. Last year’s broadcasts reached several hundred thousand households, putting the action of SKUSA and karting in front of many motorsport enthusiasts and potential racers like never before. Cameras will be filming throughout the SpringNationals weekend, with two episodes to be edited and broadcasted during the month of May as well as multiple re-airs and on-demand segments at motortrendondemand.com.

For the six previous seasons of the Superkarts! USA Pro Tour, the prize package has continued to increase and give back to the many racers that find success and support the entire program. The cash purse for the 2016 SKUSA Pro Tour championship and the potential payout for the two headline categories – S1 and X30 Senior – is over $50,000 for the year. At the SpringNationals in May and again at the SummerNationals in July, SKUSA has the weekend payout set at $5,000, split between the two categories – with the overall point winner in each category on each weekend earning a cool $1,000 check and the rest of the reward spread over the top-five in weekend points. The championship purse for this year’s SuperNationals will again boast a staggering $15,000 for each Pro category, offering up an astonishing $10,000 to an eligible Pro Tour competitor who wins in Las Vegas that has raced in both the SpringNats and SummerNats. For the past three seasons the lucrative bonus has been offered, and a single driver has cashed in each time: Joey Wimsett (2013 - S1), Jordon Lennox (2014 - S1), and Louie Pagano (2015 - TaG Senior).

To close out the year, SKUSA Pro Tour champions (top-three) in the Vegas Pro classes will race for $6,000 in the championships points fund, with both drivers atop the point standings taking home $3,000. In total, should a Pro driver sweep the SpringNationals and SummerNationals, and score the victory at the prestigious SuperNationals, he or she would earn $18,000 for the season with the addition of the Circle of Champions benefits.

The Circle of Champions Program was instituted to help promote the champions of each season into the next year. Those drivers from 2015 who finished the points standings on top are provided with complimentary entries, race tires, fuel and oil for this season. The champions from this season will be awarded the same package for 2017, worth approximately $3,000 to each title winner – as well as the coveted SKUSA National #1 plate.

The cash purse for the 2016 SKUSA Pro Tour is not restricted to the Pro categories. SKUSA will once again offer cash purses for the six remaining classes in the Pro Tour line-up – with only one restriction. For any class other than S1 and X30 Senior, a $1000 purse will be put on the line should the field hit a minimum of 30 drivers. The overall weekend point winner will be awarded a check for $500, while second and third will receive $300 and $200, respectively. Three classes have already made the cut, as they approach their class cap of 40: Mini Swift, X30 Junior and X30 Senior. Multiple classes, including S2 and X30 Master, are not far behind.

Honda Performance Development/HPD is supporting the SKUSA Pro Tour once again with a 2016 contingency program for the Stock Moto categories. The program totals $9,000 – with the top-three drivers in S1, S2, S4 and S4 Super Master in the final season standings receiving cash. Each champion earns $1,000, with second and third taking home $750 and $500. All drivers must be a registered and current Honda Racing Line member to qualify - free to sign-up or renew. Drivers must now renew annually.

For the SpringNationals, the following companies have signed on to support the SKUSA Pro Tour as class sponsors:

Drivers planning on competing at the 20th annual SuperNationals in Las Vegas this November can help secure their chances of getting into their class starting now, as competitors participating in both the SpringNationals and SummerNationals will be eligible for the SuperNats Priority Pre-Entry Program. Complete details can be found HERE.

Superkarts! USA is reminding competitors and teams to order practice tires and practice fuel ahead of time to ensure supplies will be on site – especially as SKUSA is offering an ‘unofficial’ practice day on Thursday from noon to 7pm (payable on site). No outside fuel, especially 55-gallon drums, are allowed to be brought in per fire code. The team order deadline for practice supplies is April 18, while individual orders may be purchased via the online store until midnight on April 24. The original host hotel – Courtyard by Marriott Phoenix North/Happy Valley – is sold out. However, right next door is the Residence Inn by Marriott Phoenix North/Happy Valley, now offering a last minute SKUSA room block. The special rate of $108+tax/night for 1 king bed with pullout sofa is good until April 22 or until this block sells out (hotel has no double rooms). Head over to the SpringNationals Hotel Page on the SKUSA website for booking information.   For more info on anything related to Superkarts! USA, please visit the website – www.superkartsusa.com and be sure to follow the Superkarts! USA Facebook page and Twitter account – or call the SKUSA head office at 951-491-0808.