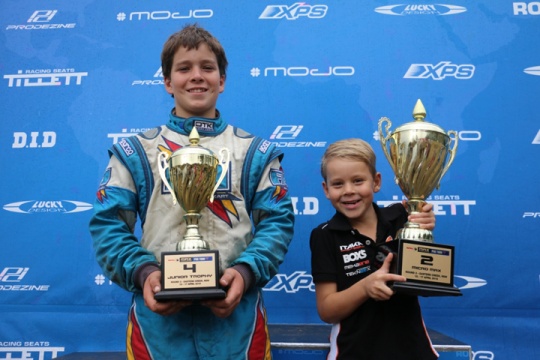 Press Release by: KartSport New Zealand
Emerson Vincent from Pukekohe, was again the best Kiwi performer at the latest round of this year's Australian Rotax Pro Tour at Sydney's Eastern Creek International Kart Raceway over the weekend, finishing a close second in the Micro Max class.
The seven-year-old was the sixth quickest class qualifier and after a dnf (did not finish) in the first heat race, stormed back to finish third in the second heat, eighth in the third, seventh in the Pre-Final and second (by just 0.1 of a second) in the Final to Canberra driver Sebastian Ruiz.

In doing so Vincent has retained his points lead in the series class standings and now leads Ruiz by 141 points heading to the fourth round at Ipswich in Queensland in early June.

The Sydney round saw 10 Kiwis take on their Australian Rotax category counterparts with Samuel Wright next best finisher with fourth place in the Junior Max Trophy class Final. The result elevated the Auckland youngster to third in the class points standings, just 47 points behind second placed Callum Bishop.

Callum Hedge from Tauranga was also looking good for a top six finish in the Junior Trophy class only to end up 15th in the Final after a round-best fourth place in the Pre-Final.

Connor Davison from Hamilton got a good start to the weekend in the Mini Max class, qualifying fourth fastest and finishing sixth in the first heat. A dnf (did not finish) in the second heat and 19th place finish in the third set him back but 10th in the Pre-Final proved he was heading in the right direction with seventh place in the Final a just reward.

Pukekohe driver Matthew Payne was also looking good in the Junior Max class, improving on his 15th place qualifying spot in the heats and Pre-Final, only to fail to finish the Final. That left Christchurch's Jaden Ransley the best of the three Kiwis in the class with 14th place in the Final.

Fast-rising Wellington female driver Rianna O'Meara-Hunt impressed early on with the ninth quickest qualifying time and a best finish of eighth in the Junior Max heats only to end up 18th - after being hit and turned around - in the Pre Final, and 20th - again, after contact resulted in a bent kart - in the Final.

The Stewart sisters, Madeline and Ashleigh, also from Wellington, had a mixed weekend, though both ended up reasonably happy with their results in the 125cc Rotax Max Light class.

Points-wise this puts Madeline in ninth place in class after three rounds with Ashleigh 20th.

The Kiwis are now back home but most will be returning to Australia for the fourth Pro Tour round at Ipswich in Queensland over the June 04-05 weekend.