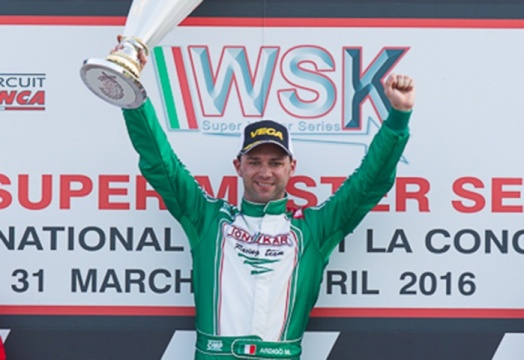 Author: Vroomkart International
Marco Ardigò wins the third round of the WSK Super Master Series ahead of Jordon Lennox Lamb after a breathtaking KZ final. Logan Sargeant wins the OK class whilst Noah Watt triumphs in the OK Junior. Evan Mallett chase the Mini title winning the trhird round.
KZ – Jordon Lennox Lamb (BirelART-Parilla-Vega) and Flavio Camponeschi (CRG-Parilla-Vega) overtake Marco Ardigò (Tony Kart-Vortex-Vega) during the first lap. The Tony Kart driver doesn’t give up, and he takes back the lead with two hard manoeuvers over Camponeschi during the third lap, and over Lennox Lamb during the fourteenth lap. The race ends with the leading duo wheel-to-wheel on the finish line, and the victory goes to Ardigò for only fifteen tousandth of second! Third place for Ben Hanley (CrocPromotions-TM-Vega) who gets the better of Paolo De Conto with an amazing overtaking, sliding into the turn ahead of the Italian driver. Leonardo Lorandi (Tony Kart-Vortex-Vega) wins the KZ2 class with the eight place overall.

OK – The American Logan Sargeant (FA Kart-Vortex-Vega) dsimply sweeps the entire week-end. The final race seems another day in the office for the Ricky Flynn Motorsport driver: he gets passed by Thomas Joyner (Zanardi-Parilla-Vega) in the early stage of the race, coming back in first position during lap four. From that moment Sargeant starts opening a considerable gap of more than three seconds until the checkered flag. Clement Novalak (Tony Kart-Vortex-Vega) finishes third a consistent race, ahead of an amazing Pedro Hiltbrand (CRG-Parilla-Vega) who starts from the fourteenth position on the grid, showing why he is leading the championship.

OK Junior – Noah Watt (Tony Kart-Vortex-Vega) wins the OK Junior class, driving in solitude. Behind his shoulders Sami Taoufik (FA Kart-Vortex-Vega) touches Ulysse De Pauw (BirelART-Parilla-Vega) after the start, and David Vidales (Energy-TM-Vega) during lap four. With the first two positions confirmed, the fight switches to the lowest step of the podium with De Pauw, Vidales, Kenneally and Teddy Wilson (CRG-Parilla-Vega) involved in a fierce battle. Under the checkered flag is the Belgian driver who steps on the podium.

60 Mini – The final race shows an unstoppable Mallet Evann (CRG-TM-Vega) who looks the rest of the group from the first position, while Michael Paparo (IPKarting-TM-Vega) finishes second ahead of Gabriele Mini (Energy-TM-Vega), who looses the chance to earn more point for the championship.