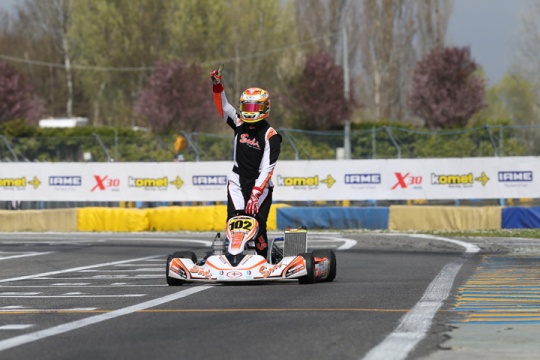 Author: Vroomkart International
The X30 Challenge Europa shows exciting races and incredible domains: Vincent Fraïsse in the Senior, Kevin Breysse in the Super, Matteo Vigano in the Super Shifter and Graham Hill in the Master. A confused Junior class gives victories to Chris Lulham and Victor Martins. Alessandro Famularo completes the list of winners within the Mini class.
X30 Junior – In race one Chris Lulham takes home the first position after a bad start. The Brit gets the better of Adam Eteki and David Malukas who engage a fierce battle which don't allow them to catch up the leader. Race two tells another business in which Lulham is no longer the leader: he drops to 4th position in the early stages, and than ends his race due to a technical failure. So the second race is a matter for David Malukas and Callum Bradshaw who fight hardly, being caught up by Victor Martins. During the battle for the lead, both drivers are penalized for overtaking under yellow flag so Victor Martins earns the first place ahead of Rens van Pelt and Adam Eteki.

X30 Senior – Geoffrey Baudot takes the lead in the beginning ahead of Vittorio Russo, but the defending World Champion Vincent Fraïsse finds some serius speed, and steals the first position taking with him Oliver Hodgson and Guillaume Barbarin who round out the podium. Saul Robinson amazes the crowd in race two right from the word “go”: he fights for the victory against Vincent Fraïsse and Oliver Hodgson after catching up the top from the 16th position on the grid. The Frenchman replies the victory in race one with more than a second on the runner up.

X30 Super – Another French driver dominates both finals within the X30 Super class, and he is called Kevin Breysse. The MMC Racing driver finds in Victor Compere his main rival, but his country man is not able to be on the tail of the leader, finishing with more than a second of gap. Thomas Ricci completes a French podium in race one, whilst Maxime Potty jumps on the third step in race two.

X30 Super Shifter – Super shifter are Matteo Vigano’s races to lose: the Italian drivers dominate the category, and Vigano wins both races. In race one the winner has Renda Pollini on his tail for the entire manche, winning by two tenth of a second. Luca Tilloca finishes third. In race two the leading group is formed by Vigano, Lorenzo Lapina and Pollini, all included within a second of gap from the leader under the checkered flag.

X30 Master – Graham Hill is simply dominant in this first round of X30 Challenge Europa: he wins race one with a flag-to-flag dominance, passing on the finishing line with almost seven seconds of advantage on the French duo composed by Wilfried Le Carpentier and Nicolas Duchateau. The story repeats in race two, with the Brit on the top spot ahead of Gerard Cavalloni and Le Carpentier.

X30 Mini – The smallest category shows a clear victory of Alessandro Famularo with over than four seconds of gap ahead of Ioannis Lantzis and his teammate/brother Anthony Famularo.