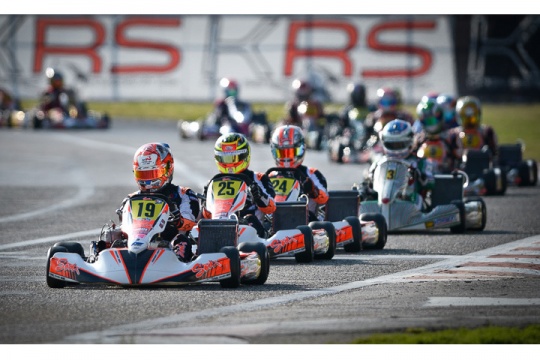 Press Release by: Sodi Kart Racing Team
The three Sodi drivers at the second round of the WSK Super Master Series have again been very convincing. On the fast track of Sarno, with temperatures rising, the Sodi Sigma KZ confirmed their great form of the early season in a spectacular way.
Observers waiting to see the French chassis running on a long track producing high speeds like Sarno, in a substantially warmer weather, had to face the facts: the Sodis continue to fight in the vanguard of the top category of international karting. On near-standard equipment, the two drivers from the Sodi Racing Team and one from Team CPB Sport have successfully prepared for the major appointments of the CIK FIA European KZ Championship and the World Championship. The highly effective collaboration with the engine manufacturer TM Racing supports the work of the entire Sodikart company in this outstanding challenge.

The French team has displayed numerous performances throughout the sunny meeting at Sarno. Under the Neapolitan sun, Anthony Abbasse first took pole position in timed qualifying, while Bas Lammers set the best time of his KZ session. Jeremy Iglesias finished ahead in KZ in the first qualifying heat, Bas Lammers won the two other KZ heats and Abbasse was credited each time with the fastest lap. In the intermediate classification, three Sodis were in the top three places in the category. Abbasse secured 2nd position in Prefinal A, while Lammers and Iglesias took a double in Prefinal B with the fastest lap to Lammers. The Sodi trio started the first round of the Final in that order. It must be recognised that the competition reacted after the Sodi victory at Castelletto, and Marco Ardigo managed to win this time at Sarno. Lammers was his most formidable rival, setting the second fastest time, until the engine warmed up and gave in because of a trivial water pump failure. Abbasse then took up the torch and climbed on the second step of the podium, with Iglesias finishing in 4th position.

The third round of the WSK Master Series Super is already on the horizon and a spirit of revenge is animating the whole team. Abbasse has a good card to play in the Championship with his 2nd position, two points behind the leader, and may consider an overall victory. Lammers and Iglesias are ranked 4th and 5th in the Championship.

Sodi army is the team to beat in Castelletto