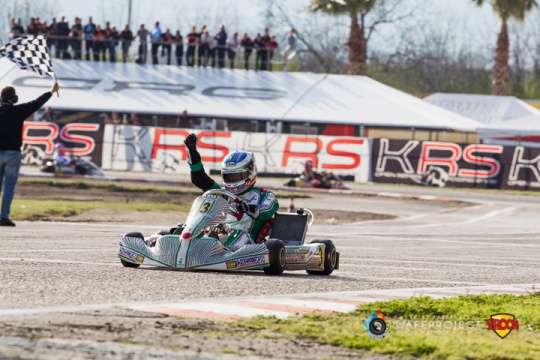 Author: Vroomkart International
The third round of the WSK Super Master Series will be the stage for the ultimate battle between Marco Ardigò (Tony Kart) and Anthony Abbasse (Sodi) for the KZ title: one victory for each driver and only two points of advantage for the italian driver. Giacomo Pollini (Renda Motorsport) leads the KZ2 classification. Hiltbrand (CRG) is still leading the OK classification, while Shvetsov is on top of the OK Junior. Giuseppe Mini is the leader between the young drivers of the 60 Mini.
Fourty-one drivers joined the shifter class during the second round of the WSK Super Master Series, and Anthony Abbasse (Sodi Kart-TM-Vega) immediately leads the group since the qualyfing, being faster than Leonardo Lorandi (Tony Kart-Vortex-Vega) and Lorenzo Camplese (Paroli-TM-Vega). Fourth his teammate Bas Lammers (Sodi Kart-TM-Vega). Throughout the qualyfication heats, Leonardo Lorandi is the fastest winning both manches and earning the pole position in the prefinal ahead of Sodi’s trio: Abbasse, Lammers and Jeremy Iglesias (Sodi Kart-TM-Vega). In the prefinal A the protagonist is Marco Ardigò (Tony Kart-Vortex-Vega): the Tony Kart ensign shows his talent winning the racing with a great come back from the seventh position in front of Abbasse and Flavio Camponeschi (CRG-Parilla-Vega). The prefinal B is a matter for Sodi drivers, with Abbasse passing first under the checkered flag in front of Iglesias and Paolo De Conto (CRG-Parilla-Vega). From the fifteenth position in the qualyfing, Marco Ardigò starts the final race from the pole position, fighting against Sodi drivers until the fifth lap, when he starts showing the way from the top spot. Behind his shoulders, Abbasse finishes second ahead of Paolo De Conto, whilst his teammate Bas Lammers gives up the fight for the runner up position during the twelfth lap. Giacomo Pollini (CRG-TM-Vega) triumphes within the KZ2 class.

After the accident in the first round, Karol Basz (Kosmik-Vortex-Vega) re-gains the lead of the OK pack signing the fastest lap in the qualyfing ahead of Tony Kart’s duo composed by Clement Novalak (Tony Kart-Vortex-Vega) and Nicklas Nielsen (Tony Kart-Vortex-Vega). The qualyfing heats show Nicklas Nielsen in first place followed by Felice Tiene (CRG-Parilla-Vega) and Karol Basz. Pedro Hiltbrand (CRG-Parilla-Vega) starts from the twelfth position in the prefinal race, and his desire to win is stronger than his opponents: the Spaniard wins after an incredible start after the green flag, gaining the first position during the fourth lap. Nicklas Nielsen finishes in second position and Lorenzo Travisanutto (Tony Kart-Vortex-Vega) rounds out the podium after a good race. It is prcisely this driver who wins the final race after a tight battle against Nielsen and Thomas Joyner (Zanardi-Parilla-vega). Second position for Novalak followed by Hiltbrand in third.

During the qualyfing the fastest driver within the eighty enrolled in the 60 Mini is Dan Skocdopole (CRG-TM-Vega) ahead of his teammate Marcos Flack (CRG-TM-Vega). Luca Micelli (EVO Kart-TM-Vega) completes the top three. After ten manches, Gabriele Mini (Enenrgy-TM-Vega) conquers the pole position in front of Kiril Smal (Energy-Iame-Vega) and Alexandros Kattoulas (Tony Kart-TM-Vega), and he repeats himself in the prefinal and final, sweeping the week-end. Behind the unstoppable Mini, Michael Paparo (IP karting-TM-Vega) concludes in second place starting the race in fifth, getting the better of Alessandro Bizzotto (CRG-TM-Vega).

Here are the results.