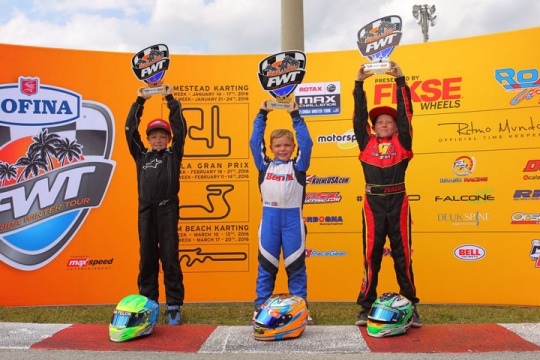 Press Release by: Benikarts
Round one of ROK Cup competition and the final round of FWT ROK Cup.
Team BENIK drivers spent back-to-back weekends in Florida, winning as they went along starting with the first round of 2016 ROK Cup USA program, held March 4-6 at Palm Beach Karting (PBK). The second weekend brought the final round of the Florida Winter Tour ROK Cup USA Championship, which took place March 10-13 at the same Jupiter, Florida facility where the squad continued to add to their already impressive resume.

In the first weekend of ROK Cup competition, BENIK drivers Tyler Maxson and James Egozi had strong showings in the Mini ROK class. In Sunday’s final, Maxson would cross the line first, but would be dropped to third following a post race penalty. Egozi, a newcomer to the Mini class who finished second on track, took the top step of the podium after Maxson’s penalty to put two BENIK drivers on the podium.

In the Junior class, Lachlan DeFrancesco brought home a second place finish on Sunday. Showing speed to run at the front of the field throughout the weekend, the Team BENIK driver narrowly missed the victory after a very exciting and intense final lap.

The next weekend, Team BENIK remained in Palm Beach for the final weekend of the Florida Winter Tour ROK Cup USA Championship. With championships on the line, team drivers did not disappoint as they continued their winning ways.

BENIK drivers in the Micro ROK class put on a good show to end the series. After qualifying on pole for the prefinal and taking an early lead, Oliver Denny would finish second to teammate Freddie Slater. In the final, Denny spent most of the race in fourth position, only taking the lead on the final lap. He would go on to win the race, with Slater finishing in fourth.