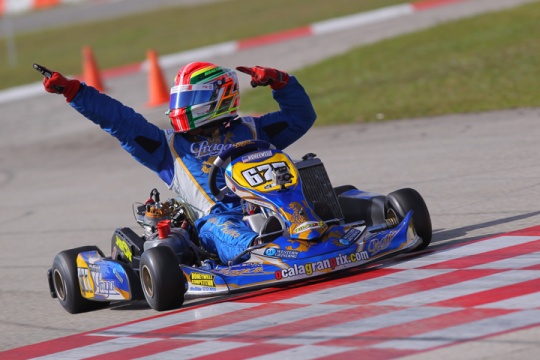 Author: Vroomkart International
Face to face with Anthony Honeywell, 2016 Florida Winter Tour championship within the Master ROK category.
The Florida Winter Tour, promoted by MAXspeed Entertainment, is well known for its competitiveness. Anyway we have seen some drivers sweeping the competition even if they were at their first participation to the championship. Anthony Honeywell is one of those, so we asked him which is his recipe to win.

We’ve seen a clear domain with two victories and a second place, and it seemed quite easy for you to win the title. From your side, how did the championship go?

"About a week prior to the first event at Homestead, I was contacted by Tanda Racing, a local Praga team, asking me if I would like to race the ROK Cup series with them. Having never raced the motor package, tires, or track before, I expected things may be difficult at first, but I enjoy a new challenge. My tuner, Kyle Kuntze, was great throughout the entire series getting the Praga chassis dialed in. At Homestead, we were learning something every time we got on track and getting faster, ultimately driving up to a second place finish. By the time we arrived at Ocala for round two, we had found some more speed and I was able to qualify on pole and win the race. Chris and Mario at Ocala Gran Prix handled all of my engine tuning throughout the series, helping me stay up front. As the series progressed to the final round at Palm beach, Kyle and I continued to find more speed in my driving and the chassis. Once again, we qualified on pole and won the race and this helped me win the prestigious FWT Championship. To win a championship of this caliber, you can not do it alone, it takes a lot of help and some racing luck."

What’s about this FWT 2016? What do you think about the championship and the whole organization?


"This was the first time I have raced the Florida Winter Tour. Throughout the USA, all kart racers recognize the FWT as a series with tough competition in all classes. I really enjoy the format of the series, having three heats, a pre final, and a final. Depending on the event, they have around 70 laps of competition. MAXspeed, the promoter of the event also does an excellent job of keeping the races running smoothly. They have extra time built into their schedule, so that they do not have to shorten races if they fall behind. Overall, it is a professional and fun series to race."

A title is the best way to start a season, in which championship will you race this year?

"Starting a season like this is great, almost surreal, but I have to keep working and getting faster. I plan on racing the SKUSA Pro Tour, the ROK Cup Midwest Series, the Rock Island Grand Prix, the ROK Cup USA National Final, and traveling to Italy for the ROK Cup international final."