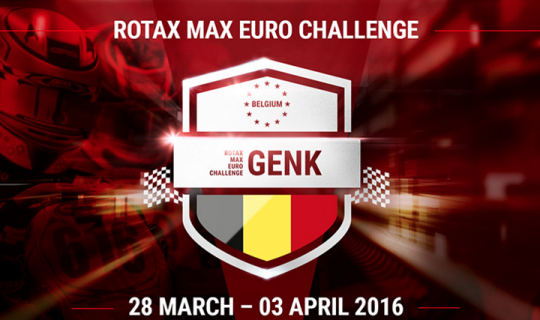 Press Release by: Rotax Euro Challenge
The countdown has started: From 28th of March to 3rd of April 2016 the ROTAX MAX Euro Challenge kicks-off its new season. For the 13th successive year Europe's most popular ROTAX series is promoted by Roland Geidel and his RGMMC Group which has always been a warrantor for perfect organisation and professional processes. Over 80 international events have been run by the RGMMC Group and 2016 are many more to follow.
The opening round will be held on the 1.360 metres long track of Genk (Belgium) followed by the second stop on the Italian track "7 Laghi" in Castelletto (Italy) from 9th to 15th of May. The high speed track of Zuera in Spain will mark the second halftime of the season from 18th to 24th of July, before Salbris (France) will host the final round from 22nd to 28th of August.

A foretaste was already given by the traditional ROTAX Winter Cup in Valencia (Spain) in February. During this rehearsal the international ROTAX scene already showed breath taking fights on the tarmac while RGMMC set new benchmarks in the field of broadcasting: Apex, the new time keeping partner was introduced, delivering even more data to the drivers and mechanics. Equally the display of results never was visualized better: impressive graphics and innovative features make live timing and live stream even more appealing to thousands of viewers all around the world. Speaking about streaming service one has to mention another improvement too. All new HD cameras and a team of cameramen make for most vivid and real pictures during the events, bringing the purest racing action live to your mobile, tablet or PC.

Having a look at the subscriptions, the ROTAX MAX Euro Challenge will welcome about 150 drivers for the first round at Genk. Over 20 nations will compete in the three categories of junior, senior, DD2 and the special classification of DD2 Masters.

Over 50 junior drivers will start at Genk, fighting for the first points of the season. Adam Smalley (Coles Racing) could play a leading role in this category. After winning the Winter Cup, the British youngster belongs to the top favourites. Same applies to his fellow countryman Tom Canning (KR Sport) who finished second at Valencia. But there are many more top drivers such as Axel Charpentier or Mark Kimber (both Strawberry Racing) who look back on a strong 2015 season in the Euro Challenge. Yet these candidates only mark a fraction of the large grid, which surely will come up with some surprising twists in the end.

A great show is expected in the senior category. Over 40 drivers are heading for the European crown this year. But the grid not only impresses with its quantity. Drivers' quality is extremely high too and represents the best of international ROTAX racing. First to mention is Rinus van Kalmthout (Daems Racing): The reigning vice champion of the Euro Challenge is ready for the big hit this year and surely will not be satisfied with the runner-up role again. Yet the Dutchman will not have a walk-over. Winter Cup winner Nicolas Schoell (Strawberry Racing) from Austria or the Turkish top driver Berkay Beslar (Bouvin Power) will give him a hard time. Then there is another name one should keep an eye on: Jack McCarthy (Strawberry Racing) from the UK. The reigning European junior champion will debut in the senior class, challenging the established drivers and as the past has proven, the youngsters are always good for a surprise. The listing of favourites could go on endlessly but finally we have to wait and see what the season start really comes up with.

The DD2 category promises a lot of action, too. With around 40 drivers the grid is well-stocked and consists of designated top drivers of ROTAX gearbox karting. The man to be beaten certainly is titleholder Ferenc Kancsar (VPDR). The Hungarian switched the team and is now racing for the successful squad of VPDR. The new combination still has to prove its power but should not be underestimated at all. Kancsar's hardest opponent could be Edward Brand (CRG SPA). The Brit finished fourth in the senior category of the 2015 Euro Challenge, now stepping up to the DD2, where he already proved his skills by winning the Winter Cup at Valencia. Alongside there is Brand's teammate Luka Kamali (CRG SPA). The German not only convinced by some strong Euro Challenge races in 2015 but even took the title in his domestic RMC championship. The Swiss Kevin Ludi (Spirit Racing) is another quick man to be mentioned, always convincing with top results and consistency. Austria's Constantin Schoell (Daems Racing), Finland's Ville Viiliainen (VRT), Spain's Dalmau Caballero Oriol or Britain's Barrie Pullinger (Dan Holland Racing) are some more prominent and successful names completing the circle of favourites.

As for the Masters classification the former champions Christophe Adams (GKS Lisette Power) from France and Martin Pierce (Uniq Racing) from Ireland aim to take another title. But they have to watch out for Slawomir Muranski (Wyrzykowski Motorsport).The driver from Poland impressed at the Winter Cup, when he not only won the Masters category but finished third on the podium in the overall grid of the DD2 class. Eventually it could be time for a female champion: Tamsin Germain (DG Racing) is ready for another successful Euro Challenge season which may finally bring the total victory for the British racing lady.

The 2016 season of the ROTAX MAX Euro Challenge promises a highly balanced level of competition and most thrilling race action in each category. At last Genk will unveil the first pacemakers and everyone is invited to join the event live. More information regarding reports, photos, results and live TV stream are available on the official websites www.rotaxmaxeurochallenge.com or www.telemundi.com.