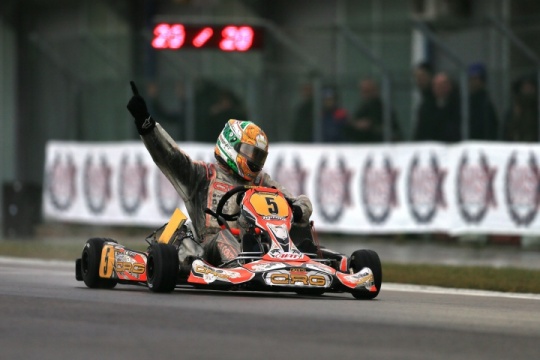 Press Release by: CRG Racing Team
De Conto on CRG-Maxter won a spectacular Final in Adria's first international round of KZ. Positive performances put in by all CRG drivers.
Good race for Pex, fourth. Great Camponeschi and Tonteri in OK. A technical problem slowed down Tiene instead. Lloveras had to retire. Joyner handed a 10s penalty, similar fate to Hauger in OKJ. Skocdopole excellent in Mini.

The first counter-charge after the World Championship of Le Mans. This is what the wet KZ Final of WSK Champions Cup looked like at the Adria Karting Raceway, as CRG driver Paolo De Conto took a fair and square win on CRG-Maxter by Renda Motorsport.

CRG had a crackling opening of 2016 in KZ keeping the same momentum shown at the end of 2015, when Jorrit Pex and CRG won the World Championship at the last lap on Paolo De Conto. The response from the Italian arrived timely in Adria in a race that was all bits as memorable as that run in Le Mans. 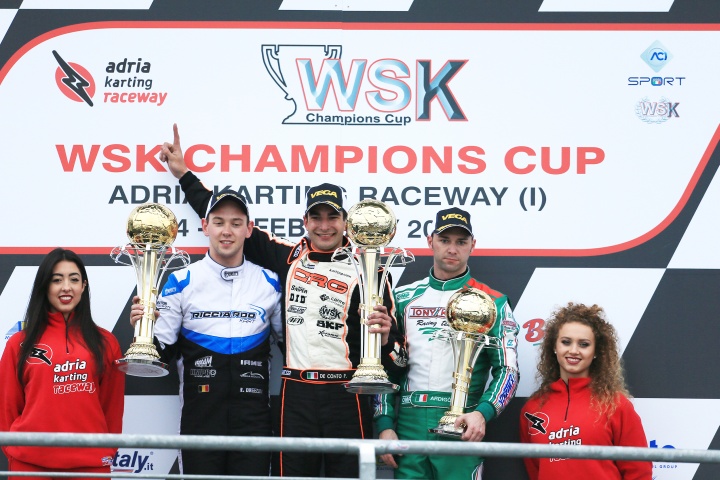 A STELLAR DE CONTO IN KZ AT THE WSK CHAMPIONS CUP
Paolo De Conto has been the ruler of the weekend of Adria thanks to his great driving skills and to the support of the competitiveness of the CRG Road Rebel chassis and of the new Maxter MXS-2 engine set up by Antonio Renda. De Conto scored an incredible victory this time in Adria. After losing some ground early on, he was about 3 seconds shy of the leader Marco Ardigò, but then he unleashed all his speed closing in on the leader. He was accidentally hit from behind by Patrick Hajek while he was ready to move an attack on the leader though. Things seemed to be completely compromised for the Italian driver, but De Conto managed to rejoin (from standing) and closed in again on the leading group, taking all of them one after the other like if they were... traffic cones. He eventually secured the victory of the race with a successful overtaking move on Rick Dreezen at the last lap, while Ardigò ended third on the podium. The fourth place went to CRG's World Champion Jorrit Pex, who recovered well the delay accumulated in qualifying and heats. His brother Stan Pex ended the Final early, but up to that point he had produced a great weekend showing a solid growth. 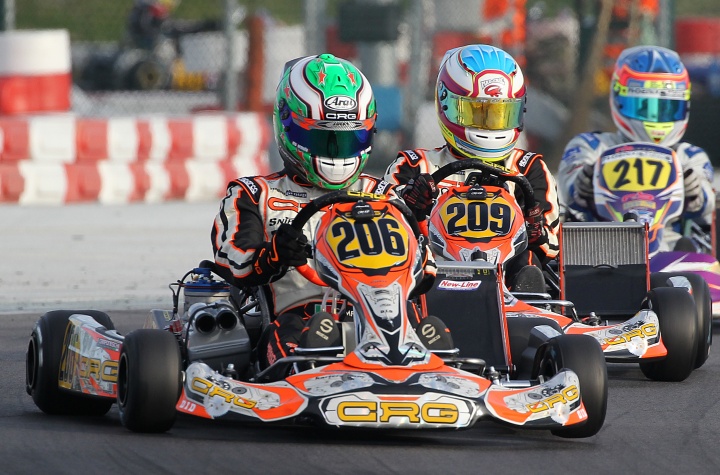 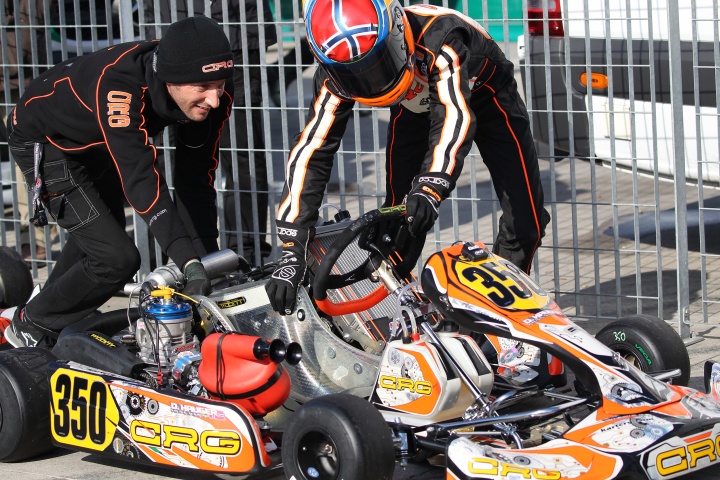 CRG DRIVERS STRONG IN OK AND OK JUNIOR
CRG scored very positive performances, both technically and as regarding drivers, in OK and OK Junior, the two new international categories at their absolute debut in Adria. The new entry of CRG Flavio Camponeschi ended fourth and has always been among the protagonists, as did the young Finnish driver Paavo Tonteri, who was at ease in the higher category and pulled a great fifth place in the Final. Felice Tiene was also among the main protagonists but obtained the 11th place in the Final due to a technical problem to the axle shaft, after being fifth in the Prefinal and scoring a great second in one heat. A technical problem stopped the Spanish driver Xavier Lloveras in Prefinal instead. Tom Joyner, on Zanardi, was handed a 10s time penalty for the uncorrect positioning of the front fairing, after his victory in the Prefinal. The British driver of CRG group managed to put in a comeback Final taking the eight place. In OK Junior, the young Dennis Hauger, on CRG-Parilla, was also handed a 10s penalty and was excluded from the Final. Hauger was at the debut in the higher category, after dominating the past two seasons of 60 Mini. The Norwegian driver run a very positive maiden race anyway. 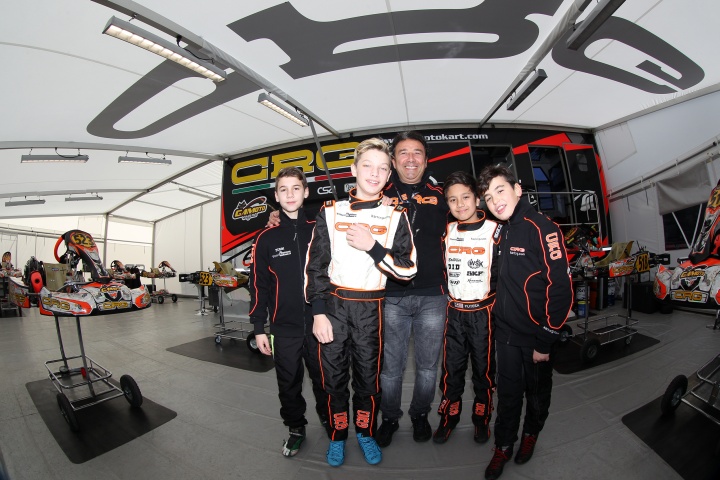 CRG BRAND SHINING ALSO IN MINI
Among the several 60 Mini drivers on track in Adria on CRG chassis, the Czech driver Dan Skocdopole of team Gamoto Racing showed the greatest speed. He secured the pole position, won heats and his Prefinal. Dan was eventually stripped from the third step of the podium in the Final as he was unfortunately penalized by 10s for the front fairing rule and was therefore relegated to the final eighth place. Riccardo Camplese (team Gamoto) has also been very competitive and obtained the sixth place in the Final. Very good race also for Federico Cecchi of team Morsicani, who was 14th in the Final after a good comeback as he was also handed a 10s time penalty in the Prefinal for the same reason of the others.

DINO CHIESA, CRG TEAM PRINCIPAL
Dino Chiesa made his debut in Adria as Team Principal of CRG group. This is his comment after the first exit in this new role. “We are really happy for what achieved in this first international round of the year that saw the presence of nearly all the main teams and their works drivers. Paolo De Conto obtained a well deserved victory; he has been really superb in KZ. We ended close to the podium in the new category OK with Flavio Camponeschi, but rain often shuffles cards. Paavo Tonteri showed great speed both on the dry and wet. I am sorry for Felice Tiene, who could not show his potential in the Final due to a problem to the axle shaft that got damaged in a contact at the start. I am also sorry for the Spanish driver Xavier Lloveras who ended his run in Prefinal due to a technical problem. Dennis Hauger has been competitive in OK Junior despite being at the debut in this category. Unfortunately, a lot of penalties were handed due to the incorrect positioning of the front fairing also in consequence of accidental contacts. This stripped a lot of drivers from the chance of getting what they would have deserved on track. I do not think it is right to continue in this way. I do not have solutions, but this is certainly the wrong way.”

PAOLO DE CONTO'S SATISFACTION
This is Paolo De Conto's comment as winner of the KZ Final: “I am really happy, I redeemed the World Championship lost at the last lap. In Adria I gave my best in the final lap. When I was hit by Hajek I did not give up, I digged deep into my energies instead. In the end I was very quick, as I started with a fairly low tyres pressure and this helped my comeback. I was expecting Ardigò to lose some ground after his initial advantage, and that is what happened. I learned to be fast also on the wet and I am very happy about this. It has been a good satisfaction also for Antonio Renda's team. Everything was great, starting from the set up of the CRG Road Rebel chassis to the preparation of the new Maxter MXS-2 engine: super!”