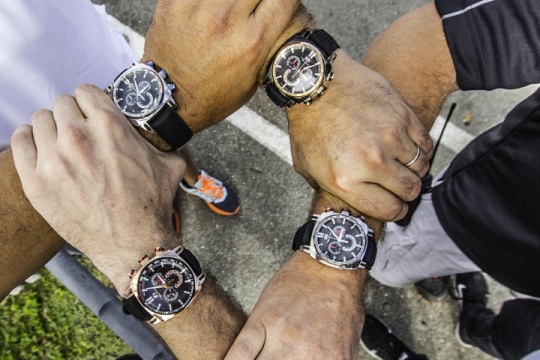 Press Release by: MAXSPEED GROUP INC.
“Luxury watch maker announced as MSE partner”
Based in Beverly Hills, California, luxury watchmaker Ritmo Mundo has taken on the title of “Official Time Keeper” for all 2016 MAXSpeed Entertainment promoted events. With longstanding ties to the motorsports industry, Ritmo Mundo has joined forces with the largest karting race promotion company in the world, outfitting series officials and executives with cool, modern watch styles Ritmo Mundo is known for, ensuring timeliness at all 2016 MAXSpeed events.

“We are pleased to work with Ritmo Mundo and Mr. Ali Soltani as “Official Time Keeper” in 2016,” explains Richard Boisclair, MAXSpeed Group President. “The quality and craftsmanship of Ritmo Mundo watches in undeniable. Three of the past six Indianapolis 500 race winners, Dan Wheldon, Helio Castroneves and Ryan Hunter-Reay, wore Ritmo Mundo. They offer some of the hottest watches in the world, and seeing them on our officials, in the paddock and on our social media outlets has already created quite a buzz. We are confident the partnership will be beneficial for all involved.”

Ritmo Mundo offers a wide array of sophisticated and modern designs, all made with the utmost in quality and craftsmanship. True to their motorsports ties, Ritmo Mundo created the Limited Edition Dan Wheldon Racer to honor the legacy of the late Dan Wheldon. The limited edition of 100 makes this a true collectors timepiece, with 15% of sales benefiting The Dan Wheldon Foundation on all orders placed until February 29. Wheldon lives in the hearts of many karting drivers, particularly with the Florida Winter Tour as a past participant in the series, with the Dan Wheldon Ambassador Award continuing at the 2016 Sofina Foods Florida Winter Tour Presented by Fikse Wheels.

The 2016 Sofina Foods Florida Winter Tour Presented by Fikse Wheels resumes with round two at the Ocala Gran Prix karting facility in Ocala, Florida February 11-14 for ROK Cup USA and February 18-21 for Rotax MAX Challenge.  Live event streaming will be available starting Friday of each weekend at http://bit.ly/1mDVTsQ.