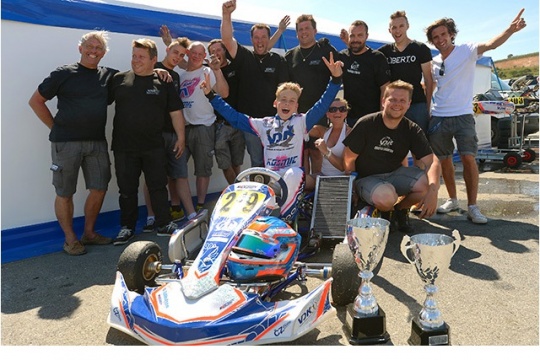 Press Release by: FIA Karting
The Belgian team VDK Racing, run by the Verdaasdonk brothers, is one of the private teams of reasonable size that has competed in international racing for many years, scoring leading results.
European Champion in 2002 in ICA with Jonathan Thonon, 2nd in the World Cup for KF2 in 2009 with Stoffel Vandoorne, 3rd in the KF-Junior European Championship in 2015 with Kenny Roosens, VDK Racing also contribute to the rise of Jules Bianchi, Jean-Karl Vernay and Ulysse de Pauw. Close to the IAME factory, VDK Racing has started preparations for the 2016 season. Always passionate, Eric Verdaasdonk welcomes the track debut of OK and OK-Junior.

Why are you optimistic even before the first race in OK?
"Everyone understands the desire for simplification in the new CIK-FIA regulations for direct drive engines. But it must be remembered that this is more of a positive evolution than a revolution. Manufacturers have not started with a blank page, they have relied on nearly 10 years of experience, so much so that we could have retained the KF name without it being shocking. The first testing that we have just done already confirms that the new generation of engines is very reliable. I believe that the base engine can mostly run for 20 hours, and the crankshaft bearings will last a whole season. An OK-Junior will be as solid as a one-make challenge engine. With its higher maximum speed, the OK will require more frequent replacement pistons, but that does not incur major costs. On paper, the new engines are already very convincing and meet the expectations of the most of the karting industry."

What do you say to those who criticize the OK generation?
"Remember all the negative comments that were heard early in 2015 about new front spoiler attachments. And now? Everyone welcomes them! I think it will be the same with OK engines. As I just explained, it is not a flashback to the time of 100cc. Current engines are much stronger. We have also heard a lot about the push start, but honestly it's really not a problem. This year we have a very young driver coming from Cadet class in France. In his first tests, he was able to start his OK Junior on his own six times in a row. It should not be that complicated. There will necessarily be a discovery and adaptation phase for Drivers and mechanics, and perhaps the need to further improve fitness, but isn't this a good thing? On the other hand, simplification of the engine reduces the risk of failure. We remember in particular the KF was still encountering starter problems late last year. The danger of seizing is also mentioned regarding these direct drive engines. We must be clear: modern engines may eventually seize at the end of the break-in period or in cold weather, but otherwise, once you master carburetion, the risk seems low, less than a KZ anyway."

What do you think the strengths of this new direction are?
"The lowering of the weight is essential to performance. The chassis becomes more manageable, the tyres work better, and finally, there is more pleasure in driving. As team leader, I have already seen that the assembly and maintenance of OK is much simpler and faster than before. For us, the amount of revisions will be lowered. With a purchase price and a reasonable maintenance cost substantially similar to those of single-brand challenges, national-level drivers will be able to use this type of engine without having a big budget. This is why the return to fundamentals is beneficial to the entire sport of karting."