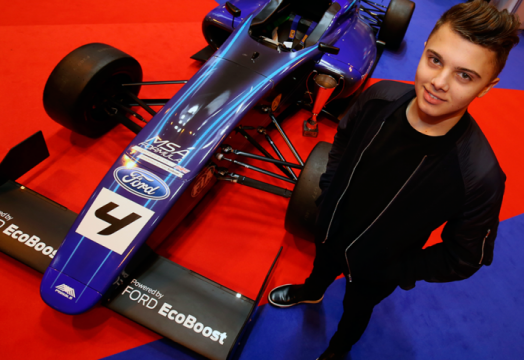 Press Release by: Infinity Sports Management
Max Fewtrell will team up with Carlin for an assault on the MSA Formula title in 2016.
16-year-old Fewtrell, from Birmingham, has a wealth of karting experience stretching back to 2009, winning the Trofeo Andrea Margutti KFJ series in 2014 and finishing third in the German KFJ championship the same year.

Since graduating from KF in 2015, Fewtrell has gained experience of slicks-and-wings machinery by racing in the MRF Challenge Formula 2000 Series, taking a best finish of third in Dubai against drivers with prior experience of Formula Three and BRDC Formula 4.

The partnership with Trevor Carlin’s respected outfit will aim to replicate Lando Norris’ tally of eight wins from 2015, which resulted in Norris being crowned the inaugural MSA Formula champion.

Each of the ten rounds will be shown live on ITV4 in support of the UK’s premier racing package, the Dunlop MSA British Touring Car Championship (BTCC), which regularly attracts capacity crowds to all major British Circuits.
Max Fewtrell
"I’m really excited to get going. Carlin is a really big name in motorsport, all the little details I learn with them will definitely help me throughout my career. I couldn’t really ask for a better place to start my career in cars.
The tests have gone really well, our pace is looking strong and I’ve been improving every time. The goal is definitely to win the championship this year, I can’t wait!"
Harry Soden, Infinity Sports Management
"MSA Formula will be a really good stepping stone for Max. Testing has gone well, he’s been quick, eager to learn and gets on well with the team, so we’re looking forward to seeing how he progresses.
With a race-winning team like Carlin supporting him, there should be no reason why Max can’t run at the front."
Trevor Carlin, Carlin Motorsport
“We’re extremely happy to have Max in the team; he’s shown great pace in testing so far, and despite his young age he has demonstrated real maturity in the car.
As his first season in car racing, no doubt 2016 will be a steep learning curve but Max has all the necessary skills to be able to be competitive from the outset.”