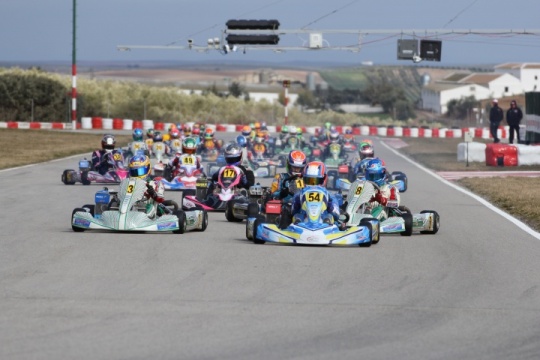 Press Release by: RGMMC
- ROTAX Winter Cup to debut in Valencia (ESP)
- 7th Edition promoted by RGMMC Group
- Full Grids represented by 20 Nations
Hibernation is finally over: From 8th to 14th February 2016, the prestigious ROTAX Winter Cup marks one of the earliest racing events of the year and will be held already for the seventh time following its debut in 2010. Speaking about debut, the 2016 edition of the ROTAX Winter Cup decided for a change of scene. For the first time the event takes place at Valencia on the Kartódromo Internacional Lucas Guerrero Chiva.

The karting circuit is one of the newest in Europe and has only been opened in 2014, which equally was when the 1.428 metres long track hosted the famous ROTAX MAX Grand Finals. Consequently the Spanish complex, which is located around 30 km west from the beautiful city of Valencia, has already proven its capability of hosting international top racing successfully.

"Traditionally the ROTAX Winter Cup is our first ROTAX international event of the year, giving drivers and teams the opportunity to kick off their racing calendars and get ready for the ROTAX MAX Euro Challenge. After many successful years of hosting the race in Campillos, we are excited to take the show to Valencia. A great destination not only for racing but for the entire family. Valencia is world famous for its cuisine, art and Cultural attractions – not to forget its heritage of motorsport events like the Formula 1 Grand Prix and the MotoGP", says Roland Geidel, CEO of the organizing RGMMC Group.

Again, the seventh edition of the event will welcome the international ROTAX scene from all around the world. Drivers from around 20 nations entered the event thus making for full grids in each category. That proves the unbroken popularity of RGMMC karting events, featuring most experienced standards and professional processes in every way.

Traditionally, the competition in the junior category is hard to predict: While a lot of youngsters made their way up to the seniors, there are plenty of newcomers, who aim to challenge the established junior drivers. Surely the experienced youngsters will have half the battle. The UK drivers Mark Kimber and Axel Charpentier – both racing for Strawberry Racing – belong to the circle of favourites as they already look back on a successful year 2015 in the ROTAX Euro Challenge. But maybe the local heroes will have an advantage on home soil. Carlos Saval Martin (MTEC-MOTORSPORT), Kilian Meyer (CRG SPA), Adrian and Alejandro Schimpf (both A SCHIMPF TEAM) and Oscar Palomo Ortiz (EKR Kart Racing) represent the Spanish armada for the junior competition.

In the gearbox category of the DD2 one expects a competitive fight for the Winter Cup, too. It could finally be the time for Kevin Ludi (Spirit Racing) to achieve the great breakthrough. The Swiss is one of the experienced and consistent drivers in DD2 but often without the decisive luck, which is needed for the total triumph in the end. Maybe he will be able to snatch the crown this time. But that is the goal of Constantin Schoell (DAEMS Racing), too, especially after having taken the second place at the 2015 ROTAX International Open on the Adria karting Raceway. Speaking of the Adria weekend, one needs to mention Ville Viiliainen (VRT). The Finn finished third in Italy and should not be underestimated for Valencia either. Edward Brand (CRG SPA) is another prominent driver one has to keep an eye on. The UK driver finished fourth in the senior category of the 2015 Euro Challenge, now stepping up to the DD2, where he will not do worse for sure. Last but not least there is Christophe Adams (Geriatric Team). The Frenchman is a top candidate in the Masters category but could make for a top result in the overall classification of the DD2.

With a full grid the senior category promises a great show. Led by the reigning European junior champion Jack McCarthy (Strawberry Racing) from the UK, numerous former juniors such as the UK drivers Tom Gamble (Strawberry Racing) and Jonathan Hoggard (KR SPORT) or Austria's Nicolas Schoell (Strawberry Racing) will debut in the highly competitive class challenging the established drivers. First and foremost Rinus van Kalmthout (DAEMS Racing) represents the benchmark. The Dutchman took the European vice championship in the senior class 2015 and is willing to improve his runner-up role. But he will be given a hard time as there are many more top drivers from the Euro Challenge aiming for the Winter Cup victory: Turkish driver Berkay Besler (BOUVIN POWER) and Germany's Christopher Dreyspring (TAD RACING) belong to the best Euro Challenge participants for years but even impressed by a remarkable performance at the ROTAX Grand Finals at Portimao – not to forget Denis Mavlanov (KR SPORT) from Russia who always is a serious candidate for a podium position.

In addition to winning the prestigious title of the ROTAX Winter Cup champion 2016 there are valuable prizes waiting for the drivers. In each class the winner will be given a free season in the Euro Challenge 2016, while the runner-up gets two free races and the third placed driver one free round. Summing up the 2016 edition of the ROTAX Winter Cup promises to become a spectacular non-miss event and a thrilling season opener, which will be the foretaste for the twelfth season of the ROTAX Euro Challenge 2016. More information regarding reports, photos, results and live TV stream are available on the official websites www.rotaxmaxeurochallenge.com or www.rgmmcmedia.com.