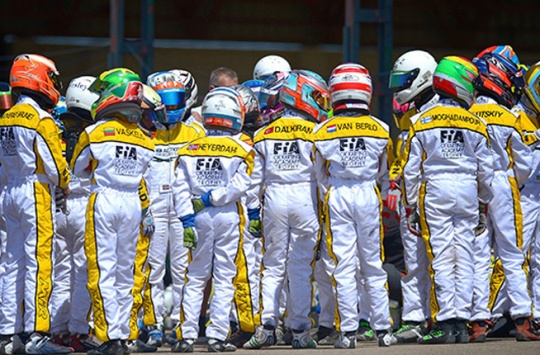 Press Release by: FIA Karting
The CIK-FIA Karting Academy Trophy begins its 7th season in 2016 with several very interesting innovations on the programme: a new type of engine, a new chassis and engine supplier, new tyres and, for the first time, a very significant prize for the winner.
More than ever, the one-make formula of CIK-FIA designed to make access to Karting Competition easier is very attractive for young talents worldwide. The large number of countries already interested at the start of the year is proof.

The CIK-FIA Karting Academy Trophy is a unique Competition of its kind that compares the best hopefuls from around the world on equal terms. Young Drivers aged 13-15 represent their country at the wheel of one-make karts drawn randomly. With the financial component relegated to the background, the formula allows the most promising talents of the younger generation to be revealed.
The 2016 season of the CIK-FIA Karting Academy Trophy revolves around three Competitions, integrated into the most prestigious Karting Championships. The Trophy will start in France, in Aunay les Bois, from April 22nd to 24th, with an additional day of testing on Thursday. It will then be the turn of Portugal to host the round on June 24th to 26th, the second Competition on the Portimao circuit, while the conclusion will be held from 2nd to 4th September in Sweden at Kristianstad during the CIK-FIA World KZ Championship.

The OTK Group won the tender to supply chassis and engines to the CIK-FIA Karting Academy Trophy Drivers for the next three seasons. From 2016, the engines will comply with the new OK-Junior regulations, while "Option" type tyres supplied by Vega will be used this year.
For the first time, additional prizes in 2016 make this Competition even more attractive, if it were needed, affirming the will to encourage the continuation of the international career of the most promising hopefuls in karting. First, the winner of the CIK-FIA Karting Academy Trophy will be invited to participate free of charge to CIK-FIA World Junior Championship held in Bahrain in November 2016 with one of the official teams of the OTK group. The CIK-FIA will also offer the top five overall in the Academy Trophy in 2016, free entry to whichever 2017 CIK-FIA Championship they choose. This bonus can be estimated on average as being worth €2,000 per Driver.

Entry to the CIK-FIA Karting Academy Trophy is through the ASN who will select the Drivers representing their country. In addition to the criteria between 13 and 15 years of age, Drivers should not have been classified among the top 15 of a previous CIK-FIA Junior Championship. To date, 39 ASNs have already expressed their wish to include at least one representative in the 2016 edition: Austria, Belgium, Switzerland, China, South Korea, Costa Rica, Czech Republic, Germany, Denmark, Estonia, Finland, France, UK, Greece, Hong Kong, Indonesia, India, Israel, Italy, Jordan, Japan, Lebanon, Sri Lanka, Lithuania, Mexico, Netherlands, Norway, Portugal, Romania, Russia, Singapore, Sweden, Thailand, Turkey, United States and South Africa. The maximum number of entries is 51 and registration will be closed on March 4th, 2016. Interested ASNs should come forward as soon as possible to the CIK-FIA.
The details of CIK-FIA 2016 Karting Academy Trophy are available on the website www.cikfia.com. For more information or special requests from Drivers, Competitors or ASNs, please contact the CIK office by email at CIKentry@fia.com.