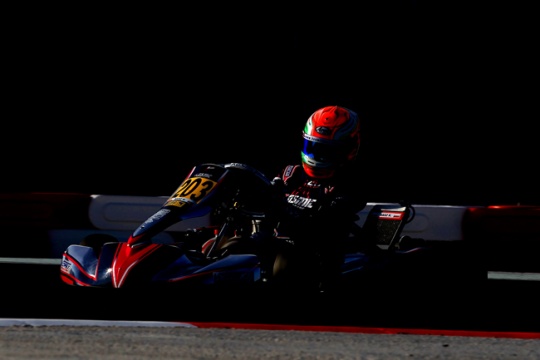 Press Release by: Kosmic
World Champion Basz and the experienced driver Hajek will drive the "Blue" patrol made up of Backman, Weerts, Milell, Pourchaire and Chappard.
Patrik Hajek’s arrival has come shortly before the celebration of our lineup of drivers for the 2016 season.
Alongside the World Champion for KF class, Karol Basz, in the new OK category, we will put on the track the fifteen-year-old Swedish Noah Milell Noah, coming from KFJ.
Among the youngest emerging OKJ drivers, alongside the Belgian Charles Weerts, already our driver in the two previous seasons, we will have two new arrivals, Théo Pourchaire and Franck Chappard.
Pourchaire comes from Mini class, the category in which he has achieved several successes in the league of his own country, France. Also Chappard is French and he can boast excellent results obtained in promotional categories of his country, furthermore he has a year of experience in KFJ category.
In KZ category, next to Patrik Hajek we will have the welcome confirmation of Andreas Backman. The latter has built a positive experience last season and will be able to reap the benefits of his work. The Racing Department will provide its drivers with the World Champion chassis in office, the Mercury MY15 and Lynx MY15 chassis, driven by top of the range Vortex engines, recently homologated, DDJ, DDS (respectively for OK and OKJ categories) and RVZ (KZ category).
The challenge we are about to start, whose official start will take place the first week of February, with the first WSK Series, is exhilarating. The Racing Department boasts the title of World Champion in KF class and everyone is aware that last season performances are a difficult goal to match, but not impossible.
Besides being involved in all the most important WSK Series events, our drivers will aim at the top of the prestigious CIK-FIA competitions.
Kosmic Kart Racing Department’s DRIVERS 2016
Patrik Hajek                Czech Republic         KZ
Andreas Backman      Sweden                     KZ2
Karol Basz                  Poland                      OK
Noah Milell                 Sweden                     OK
Charles Weerts          Belgium                     OKJ
Franck Chappard       France                      OKJ
Théo Pourchaire        France                      OKJ