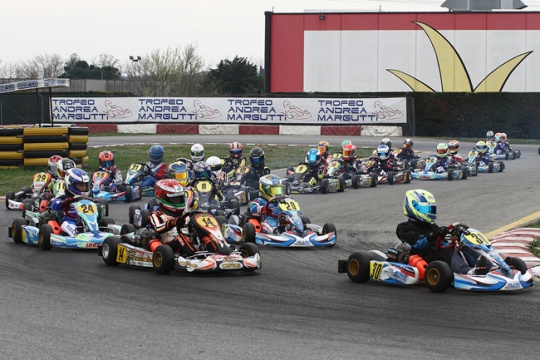 Both events are part of the CIK-FIA 2016 International Calendar and will see the new categories OK and OK Junior on track alongside the usual KZ2 and 60 Mini. Tyres will be provided by Vega.

The double commitment of Parma Karting with the organization of these two races, that are milestones in karting, will continue with renewed enthusiasm also in 2016. The Andrea Margutti Trophy will remember the Italian driver who passed away in 1989, while theTrofeo delle Industrie will celebrate yet another edition of the most ancient race in the world, whose first act took place in Parma back in 1971.

The Andrea Margutti Trophy to take place next 11-13 March is going to be quite interesting as it is will to be one of the first international appointments providing teams and drivers with the chance to challenge each other on the renewed track of Lonato that has recently been extended to about 1200 meters. It will also be a good chance to see the new OK and OK Junior on track, categories that have been introduced by the International Federation and already employed in Europe in several national championships.

The very crowded KZ2 (62 drivers on track!) of the most recentTrofeo delle Industrie was won by Simo Puhakka on CRG-Maxter-Vega run by team Renda Motorsport, while the surprising Spanish driver Marta Garcia on FA Kart-Tm-Vega took the win in KF Junior and Mattia Michelotto on Energy-Iame-Vega run by team Giugliano Kart claimed the victory in 60 Mini.

Entry lists of the 27th Andrea Margutti Trophy to be held on 11-13 March 2016 will open on Monday 8 February 2016. All information are available at the website trofeomargutti.com.