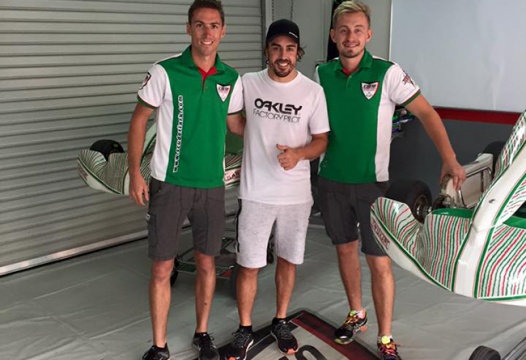 Author: Vroomkart International
After a terribly frustrating F1 season at McLaren, the 2-time F1 World Champion smiles again thanks to a go-kart.
Only 10 days ago, 2-time F1 World Champion Fernando Alonso was closing a truly miserable season at the Yas Marina Circuit in Abu Dhabi, which didn’t end particularly well as he was aggrieved by an undeserved penalty.
Less than 24 hours later, Nando found refuge in his first love turning up at the ‘Dubai Kartdrome’, one of the regular circuits of the Sodi World Series (SWS) races, to present kart drivers with awards and have a go at the track with the rental karts.

His yearning for a competitive machine must have been so great, that Nando went back to the Dubai Kartdrome a few days later to test Rotax DD2 and Rotax Max karts with the support of local team Scuderia Racing Kart.
After an immensely frustrating season, made of 7 DNF and only 2 top-10 finishes, the joy of racing was once again back on his face!

Gordon Mellis, who was on track and kindly provided these pictures, commented ecstatically “the man is IMMENSE!”

In the hope to see a more competitive Alonso in 2016, we urge him to find more time to jump on a kart…