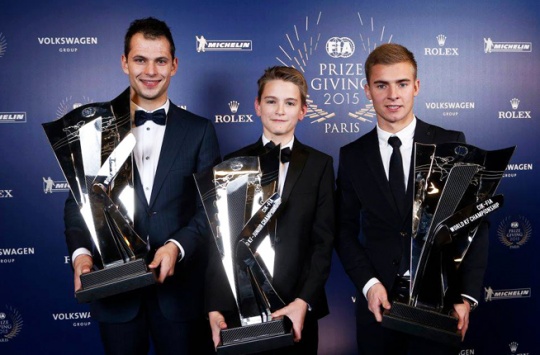 Press Release by: FIA Karting
The winners of this year’s FIA Championships have been honoured in a glittering 2015 FIA Prize-Giving ceremony at the famed Lido theatre in Paris.
In the shadow of the Arc de Triomphe, the most significant triumphs of the motor sport year took centre stage at the iconic home of cabaret on the Champs-Elysées.
While the gala evening was naturally somewhat restrained in light of the shocking events in Paris three short weeks ago, the evening was still a celebratory and quintessentially French affair, while giving the year’s biggest winners their due.

CIK-FIA World Karting Champions Karol Basz (KF), Jorrit Pex (KZ) and 14 year-old Logan Sargeant (KF-Junior) received their awards; one of the biggest reactions of the night was saved for Sargeant when he told the crowd of the eight long years that had gone into his World Championship.
At the head of the list of Champions sits 2015 FIA Formula One World Champion, Lewis Hamilton who in accepting the Drivers’ Championship trophy for the third time took his place among the legends of the sport. Hamilton’s 2015 triumph writes his name in the history books alongside iconic names such as Sir Jack Brabham, Sir Jackie Stewart, Niki Lauda, Nelson Piquet and his boyhood hero, Ayrton Senna. On his way to the title, the Briton climbed to third on the lists of both all-time wins and pole positions, and matched the record for the highest number of podiums in a season.
“It’s pretty much impossible to put into words what it means to be a three-time world champion,” said Hamilton. “It is a dream, it’s an incredible feeling and I’m very proud of my family for everything they did to get me here today. I remember how hard my Dad and my Mum worked to make sacrifices for me. It’s been a long, long journey – I’ve been racing for 22 years.This year, winning the race in Austin and sealing the championship there was one of the most special races – there’s a huge sense of pride in what I have achieved.”
A number of special Formula One awards were presented to those achieving excellence at the pinnacle of the sport and to the winners in the other FIA championships.
Photo FIA-DDPI