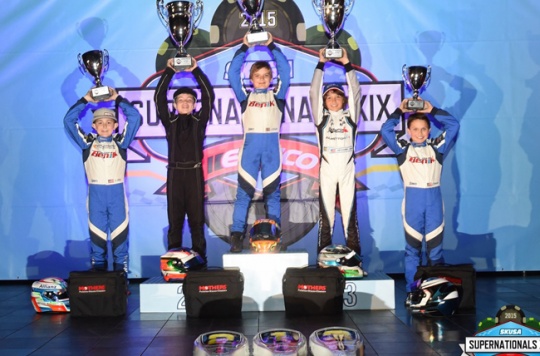 Press Release by: Benikarts
Edgar wins race, DeFrancesco wins championship.
In the final event of the 2015 karting season, Team BENIK continued their winning ways at the annual SuperKarts USA (SKUSA) SuperNationals in Las Vegas, Nevada. Taking on the TaG Cadet field, BENIK would top the podium for the victory in the most prestigious karting event in the United States and would also stand atop the championship podium yet again in 2015.
“We need to thank our drivers, crew, dealers and customers for their help and support throughout the 2015 season. Without them, none of our success would be possible,” explained Nick Mitchell, Co-Founder of BENIK Kart. “The SuperNationals caps off a great season of championships including the Florida Winter Tour, Challenge of the Americas, ROK Cup USA, SuperKarts USA, United States Pro Kart Series and US Open.”
Taking on a stout field of more than eighty TaG Cadet competitors, the BENIK brand would represent more than 25% of the field, more than any other brand in the class. With the event being hosted on the grounds of the Las Vegas Convention Center just across the street from the Westgate Hotel and Casino, BENIK would put four drivers in the top ten on ‘Super Sunday’ including first and second place results in the TaG Cadet end of the year championship battle.
Jonny Edgar would add to his Vortex Mini ROK Florida Winter Tour Championship by taking the biggest win of the 2015 season, the SKUSA SuperNationals. Anthony Willis would cross the line in fourth with Tyler Maxson putting three BENIK’s in the top five ending his weekend in fifth after driving forward from a row ten starting position. Lachlan DeFrancesco would overcome adversity throughout the weekend including a 21st place starting spot in the main event to drive forward to ninth. His efforts would award him with his third major championship of the 2015 season adding to his already impressive resume.
Mitchell continued, “This was a great way to end the 2015 season and we are now looking forward to 2016. Team BENIK will once again compete in all major karting series and events in the upcoming season as we look to carry the momentum forward in both the karting and F4 program with Carlin.”
At the SKUSA Fikse Wheels Pro Tour championship awards banquet, DeFrancesco and Edgar would be awarded for their yearly results. Topping the championship podium would be DeFrancesco who also claimed the ROK Cup USA and USPKS titles while Edgar would end his SKUSA season in second after securing the Florida Winter Tour title earlier in the year.
For more information on BENIK Kart, please contact Nick Mitchell or Ben Cruttenden via e-mail to Info@Benik-Kart.com or by phone at 754.206.4870. For all West Coast Sales, please contact Nash Motorsportz at 951.233.3431 or via email to nashmotorsportz@yahoo.com or through their Facebook at www.facebook.com/pages/Nash-Motorsportz/302987366497945. Kartworkz is also an authorized BENIK Kart dealer and will be servicing the Northeast region of the country. Please visit them online at www.Kartworkz.com or contact Jerry White at 570.237.1095.
BENIK Kart can also be found online at www.BENIK-Kart.com, Facebook at www.facebook.com/BenikKart and Twitter at @kartBENIK.