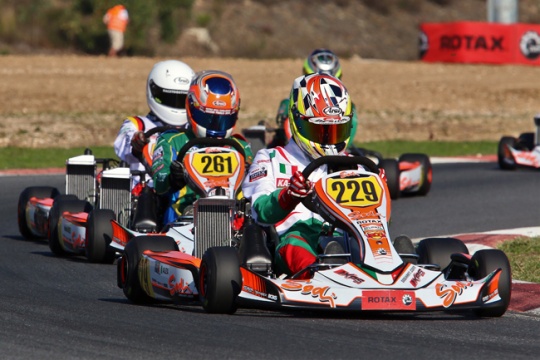 Author: Vroomkart International
Drivers in Junior and Senior put on a superb show with plenty of overtaking and exciting action. In the two-speed classes (DD2 and DD2 Masters) races were less electrifying but the performance was at the limit.


The show in Junior Max was non-stop. As many as 6 drivers fought for the win from lights to flag, with several changes up front and continuous overtaking and counterattacks. In the end, Fin Roope Ropanen had the better of Venturi, Charpentier, Thomas – who led most of the race – and Caio Collet.

In Senior, Alex was the first Italian driver ever to have won a prefinal at the Rotax Grand Finals. Lapping consistently in the 1’00”5 and stopping a fastest lap of 1’00”298, the Italian fought hard in the top-5 for the first 11 laps, when the leading duo tangled up leaving space for Alex to sneak through. Shadowed by Besler, Alex kept his cool showing some great defensive racing in the last two laps to take the pole start for the final.

In DD2 it was Kancsar to continue his domination with Varley tailing him for the entire race distance, while in DD2 Masters Stephen grabbed final pole after a nerve-racking yet fair battle with Ollikainen.