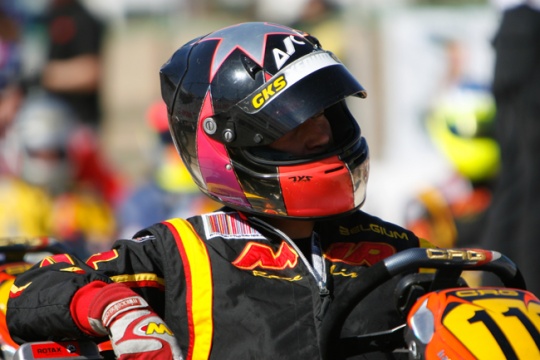 Author: Vroomkart International
Belgian driver Christophe Adams, already RMCGF champion twice in 2007 and 2009, has set a new record. Thanks to his win earlier this year in the Florida Winter Tour, the DD2 Masters driver qualified for the 10th consecutive time to the Rotax MAX Challenge Grand Finals, becoming the driver with the most consecutive participations ever.
Adams, who turned 50 in July, is one of the veterans of the Grand Finals, and despite not being the driver who can boast the oldest participation – Canadian Scott Campbell, who also qualified for the 10th non-consecutive time, holds this record as his first participation dates back to 2005 – he is certainly one of the best trained Masters around. In fact, Adams also competes in the Rotax Euro Challenge, where DD2 Masters drivers race neck at neck with the younger lot of the DD2 class.

We touched base with the fast Belgian.

How does it feel to have qualified for the Rotax Grand Finals for the 10th consecutive time?
I am very proud about it because I started to race in the Rotax series back in 2006 and I never missed a qualification. This means that I’ve won a championship every year, and it’s quite an achievement!

Can you share the memory of your first ever Grand Finals?
My first Rotax Grand Finals was in Viana de Castelo, in Portugal. The Masters category didn't exist back then, so I raced together with the DD2 drivers. I was fast in the heavy rain but I had a flat tire in the final and was forced to retire.

What's the edition of the Rotax Grand Finals you are most disappointed about in terms of results or performance?
I’m not sure if it’s because the memory is still fresh in my mind, but I’d have to say last year in Valencia. I finished 4th in the final after a fantastic race, but I was disqualified because I mounted a smaller washer on the seat strut. Rules are rules, but it’s one of those decisions that still stings.

The Rotax Grand Finals gathers the best Rotax drivers from all around the world. How did you prepare for the race?
Unfortunately I have had no time to test, my work schedule is quite demanding. Working in construction doesn't allow me to make particular preparations for the race, but at least it helps me to keep fit, and at 50th years old it’s ever so important.

What was the most difficult race of your Rotax season and why?
This season I raced 12 races in total. All of them have been tough, but especially those at the Euro Challenge. Firstly because I was the oldest driver in the DD2 Masters category, and secondly because we race all together with the younger drivers of DD2!

What makes the Rotax series stand out in the Karting scene?
To me, the engine is simple to use, the level of the competition is very high and to compete in the DD2 Masters category is very exciting!