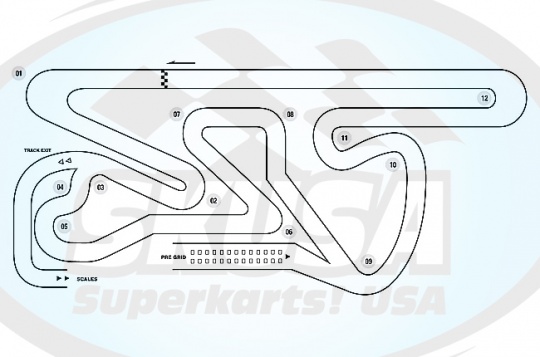 Press Release by: SKUSA Supernationals
Fikse Wheels Pro Tour contenders fight for championships on brand new layout at Las Vegas Convention Center
The 2015 Superkarts! USA SuperNationals will mark the fourth occasion during the 19-year history of the event of a location change. The first move came in 2002 when the event left the XPLEX for the Rio Hotel & Casino, leaving the home track where the event laid its roots in the sport during its first five years. After two years at the Rio, which took the annual shifterkart festival to the next level, the event moved east to the home of the ‘UNLV Rebels’ and the Sam Boyd Stadium parking lot, running four races at that unique venue. In 2008, Superkarts! USA was under the control of the Kutscher family, and Tom and Patti put in the groundwork to return to the Rio – setting up a seven-year run that attracted some of the biggest drivers in motorsports and featured some of the most exciting races in SuperNationals history. A new chapter will begin this November 18-22 as roughly 500 competitors from around the world will converge on the Las Vegas Convention Center for the SKUSA Fikse Wheels Pro Tour finale event.

With a new location comes a brand new layout, and Superkarts! USA is happy to release this year’s track design. This year’s site is one of the Las Vegas Convention Center parking lots, which is situated between the Las Vegas Strip and the LVCC convention buildings, southwest of the Westgate Las Vegas Resort & Casino – the official host hotel of SuperNationals XIX. The course will be run in the counter-clockwise direction, the first time in event history after going clockwise the past 18 editions. The layout features 16 turns and an 800’ straightaway, measuring in at 0.84-miles – and will certainly challenge every driver in each category.

“We are presenting a paddock and track like nothing ever done before,” stated Superkarts! USA Tom Kutscher. “The track is something different and original to pair with our new location. My staff and I took a little bit of the old track designs we had, and mapped out this new design. It’s fast, technical, and the complete opposite direction from any other SuperNationals. It is going to get the attention of the driver right away. As was the case with our previous temporary event locations, we were always limited to the amount of space due to the sheer size of the paddock that was needed. Now with 30 to 40 percent more space available, our options are wider in how we can design the entire site. This also allows us to provide a different layout each year that we return – and it also gives plenty of trackside viewing a few feet from the 890’ of front row pit spots.”

This new layout at the SuperNationals XIX is going to decide the 2015 Fikse Wheels Pro Tour champions, as eight drivers will leave SuperSunday with a piece of history. The top-three in the point standings in all eight categories going into the event will have a guaranteed starting spot in the SuperSunday main events, thanks to their performances at the SpringNationals and SummerNationals. In the S1 Pro Stock Moto division, the top three pilots are separated by just 105 points. Belgian driver Rick Dreezen leads the standings on the strength of sweeping the SpringNationals in May and he holds the top spot over Americans Fritz Leesmann and Billy Musgrave. The second headline division - TaG Senior - remains open for the taking, as six drivers will arrive in Las Vegas within 100 points at the lead.  As it stands, the consistent Brandon Jarsocrak holds the top position ahead of race winners Oliver Askew and Louie Pagano after the drop race has been calculated. Last year’s champion Jake Craig is right there, however, and it is he and Pagano who can leverage the ‘SuperSunday’ pass if needed – as it is the total points, not the post-drop points, that determine who get the three transfer spots. In contrast, Askew will have to race his way into the main event, so he’ll have to watch himself in the heat races. Double SummerNationals winner Jesus Rios Jr. and top rookie candidate Christian Brooks are also in the title fight.

S2 Semi-Pro Stock Moto provides some of the best racing at the SuperNationals; however, the Fikse Wheels Pro Tour fight is down to just two drivers. Carter Williams won both feature races at the SpringNationals, while Miguel Lopez doubled up at the SummerNationals.  Thanks to his consistency, Williams has a 72-point advantage over Lopez heading into Vegas, while Bermuda driver Brandon Frank sits third.

It’s the same situation for the S4 Master Stock Moto title, as three-time SuperNationals winner Darren Elliott has a slim 35-point gap over former S4 champion Jimmy McNeil. Each comes into the series finale with two wins, and both will be looking for a third victory and the accompanying championship. Defending title winner Gian Cavaciuti sits third, and is a long shot for the title should he be able to defend his SuperNationals victory from a year ago. A third category is in the same position, as Nick Tucker and Chris Giumarra are the standout drivers in TaG Master this year. Each has won twice – Tucker winning at the SpringNationals and Giumarra doubling at the SummerNationals. Vatche Tatikian leads the battle for third over Anthony Honeywell and Mario Barrios.  Drivers must take their results from the SuperNationals into the final points equation, so everything will be up for grabs come SuperSunday.

Callum Smith is a perfect four-for-four on the Fikse Wheels Pro Tour in 2015. Smith has the victory in all four main events in the S5 Junior Stock Moto program, holding the number one position in the standings with a 165-point advantage over Canadian Evan White. Hunter Kelly sits third. TaG Junior is a two-driver duel for the title, with two-time race winner Brandon Lemke leading defending champion David Malukas by 75 points. It’s a tight battle for third with Anthony Gangi Jr. ahead of race winner Zach Holden by just one point. The tightest championship battle thus far on the 2015 Fikse Wheels Pro Tour is in TaG Cadet, which features the youngest drivers of the program. Lachlan DeFrancesco and Jason Welage are veterans of their age group, and the two enter Vegas separated by just five points. Jak Crawford and Oliver Calvo are in a battle for third, with the SuperSunday guaranteed starting position going to Calvo for more total points gained thus far.

The Superkarts! USA Fikse Wheels Pro Tour finale includes unprecedented television coverage on the CBS Sport Network and will also be available on-demand through MotorTrendOnDemand.com thanks to Torque.TV. Three new shows are scheduled to include the action from SuperNationals XIX at the Las Vegas Convention Center, and more details regarding the broadcast times will follow the event.

eKartingNews.com, the official media partner of Superkarts! USA, is preparing for another year of live audio play-by-play streaming through their website. Anyone not at the event can listen in to the EKN Trackside Live program at ekartingnews.com/live from qualifying on Thursday through the main events on SuperSunday.