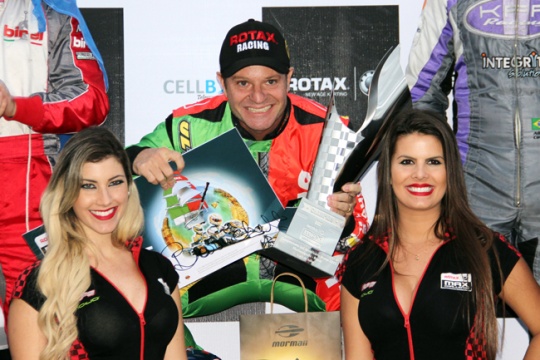 Author: Vroomkart International
Two-time F1 vice World Champion Rubens Barrichello is the first 4-wheel racing legend to have qualified for the Rotax MAX Challenge Grand Finals. At 43, the former Scuderia Ferrari driver, currently racing in Stock Car Brasil Championship, will take on the grid in the DD2 category in Portimao.
Numbers speak for themselves. Despite never clinching the F1 World Championship, Rubens’ 322 races, 11 wins, 68 podiums, 658 points, 14 pole positions and 2 vice-World Championship titles in 19 years are the numbers of a true motorsport legend.
Legend that started in Karting. Besides his five Brazilian Karting Championship titles between 1983 and 1988 and the South American title in 1987, Rubinho has always been very supportive of Karting even during his years in Formula 1 with the participation to the famous 500 Milhas de Granja Viana endurance race and Desafio das Estrelas, both held in Brazil attracting the best drivers in the world.

So the Rotax program in Brazil, which has grown exponentially over the past few years, becoming a very challenging series, was a new challenge for Rubens as well as both his children.
The participation to the South American RMC Series in 2015 is only the last milestone in Rubens’ successful career, and the qualification to the RMCGF only the last of an outstanding series of incredible achievements. In July Rubens grabbed the ticket to the Rotax MAX Challenge Grand Finals at the IRMC South American at the Arena Sapiens Track, where a total of 140 drivers took part in the event.

We touched base with Rubinho to hear what he had to say about it.

How does it feel to have qualified for the Rotax Grand Finals?
It truly feels great! At 43 I’m still going strong, I’m fast and this is all I’ve always wanted in life.

What was the most difficult race of the Rotax series and why?
It’s got to be the final of the South America championship... I took 3rd and 2nd in the previous races but had not managed to win yet... though I knew that with new tires I would have a good equipment. All I had to do was to make sure I had a great start in order to lead and push as hard as I could. And this is exactly what happened.

The Rotax Grand Finals gathers the best Rotax drivers from all around the world. How did you prepare for the race? Did you test at Portimao before the event?
Unfortunately I wasn’t able to test in Portimao before the event as I was busy with my Stock Car and Touring Car championships. That has been my only training ground in preparation for the RMCGF.

Why did you choose to race in the Rotax series?
I thought it was a great opportunity to race with the best around the world.