Author: Vroomkart International
Several heavy hitters and potential race winners featured in team lineup for US Open of Las Vegas.
Grand Junction, CO. - Energy Kart USA and CRG USA are bringing a lineup of heavy hitters to the 2015 US Open of Las Vegas, which will be held October 27 - 31 on the grounds of the Rio All-Suite Hotel and Casino. Announced this week that Stacey Cook has inked a deal with Energy Kart to become the United States importer for the popular brand, several drivers will trade in their black CRG branded karts for the new blue of Energy.
"We recently announced our deal to be the importer of Energy Karts in the United States," said Stacey Cook, owner of Energy Kart USA. "We've had some drivers make the switch already, but we'll be in a transition period for the next few months. Some of our drivers will be running Energy Karts, while others will stay on CRG. We want them to race on whatever they're comfortable with."
In the Elite Shifter class, the team will field Sabré Cook, who currently sits third in the points championship, on an Energy Kart. After completing several days of testing, Cook will look to fight for the title in her new ride. Joining her in the class on a CRG chassis will be Pablo Sanchez, who tested for Ferrari in Formula One and Santiago Garzarios, a professional racecar driver himself from Mexico.
The Senior Shifter class will see a pair of drivers on the Energy Kart chassis with Colby Yardley, currently fourth in the championship battle, and Hannah Williams. Driving a CRG chassis for the final round of the inaugural US Open season in the class will be Ryan Lankenau, Connor Thomas and Fauzi Dib.
In Stock Honda Masters, all four of the team's drivers will be piloting a CRG chassis in their hunt for race wins and podium results. Juan Garcia will have a shot at the overall series crown and accompanying prize package, as he is currently second in the points battle. Alvaro Palez, Emilio Queto and Javier Etcheveria will join him as they do battle on the temporary circuit in Sin City.
In Stock Honda Veteran, the top three drivers in the championship standings will all be driving for the team. Jet Davis, the current points leader, will be piloting a CRG USA chassis, along with Hugh Templeman, who currently sits second in the points. Dave Conyers, will make the switch to the Energy brand and will look to move his way to the championship lead.
Energy Kart will have a major presence in the Rotax Mini Max division as current point leader Jak Crawford will look to continue his winning ways. Fresh off a third place result at the ROK International Final, Crawford will battle a stout field of Mini Max drivers for the victory. Josh Fine will also see action in the Mini Max class and will join Crawford aboard an Energy Kart in the final event weekend of the series.
Sebastian Martinez will compete in the Rotax Junior class while in Rotax Senior, Carlos Gonzalez and Costa Seferlis will do battle. Two of the three competitors will drive for the team on CRG branded chassis while Gonzalez makes the switch to the blue Energy kart.In Rotax Masters, Billy Cleavlin, currently sixth in points will enter the division with Kurt Fisher.
For more information on Energy Kart USA or CRG USA, please contact them at 855.TEAM.CRG or get in touch via email, at Stacey@CRG-USA.com. 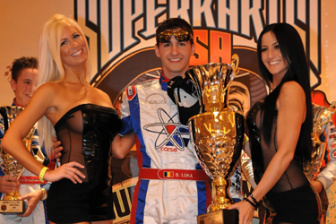 Jeremy Iglesias and CRG: together for 2021!