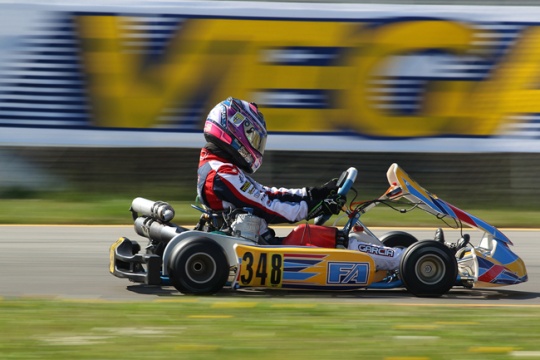 Press Release by: Parma Karting ASD
With more than 140 drivers from 21 nations, the 44th edition of the Trofeo delle Industrie will go on stage from Friday 23 to Sunday 25 with 37 drivers on track in KF Junior, 63 in KZ2 and 41 in 60 Mini.
A lot of big names present in all three categories.

More than 140 drivers coming from 21 different countries are ready to get on track for the 44th edition of the Trofeo delle Industrie, the race organized by Parma Karting at the South Garda Karting track of Lonato. The event will kick off on Friday 23 October with free practice and will live its final stages on Sunday 25 October.
Among the latest entries, the strong Spanish Marta Garcia, will be competing in KF Junior on FA Kart-Tm. After being an absolute protagonist in International karting, the fresh winner of the CIK-FIA Academy Trophy 2015 also obtained the fourth place in the European KF Junior Championship and the 13th in the World Championship.

Another very quick girl will take part in the Trofeo delle Industrie among the 37 drivers that are to compete in KF Junior: the RussianMilen Ponomarenko, on Lenzo-Lke, who has claimed the seventh place at the World Championship. The Danish driver Christian Lundgaard, fresh winner of the European Championship, will be the favourite of the eve and will compete in the Trofeo delle Industrie on Energy-Tm.

Category KZ2 also has important figures as 64 drivers have entered the most powerful category. Among these, a lot of big names likeDavide Forè, on CRG-Tm run by Renda Motorsport, who won the second race in a row at the Race of Stars last weekend in Australia
At the Trofeo delle Industrie in Lonato Forè will have to face a lot of strong rivals again, like his team mates Simo Puhakka, the winner of the Bridgestone Supercup Andrea Dalè, the recent winner of Rok Cup International in Shifter Rok Giacomo Pollini and European 2011 champion Fabian Federer. The new Italian championRiccardo Longhi will also be present on CRG. Maranello Kart will field a strong lineup comprising Massimo Dante, Tommaso Mosca,Lorenzo Giannoni and Enrico Bernardotto, VRK will take on trackManuel Cozzaglio, Luciano Medeghini and Nicola Gnudi, while CKR's lot will be led by Alessandro Pelizzari. The Indian Kush Maini and Leonardo Lorandi will be at the debut in KZ2 and it is going to be interesting to check their races out. The CroatianKristijan Habulkin on TB Kart and Lorenzo Lapina on Italcorse will certainly be among the protagonists too.

The always exciting and tight 60 Mini will have 41 drivers on track. By the look of the recent events in Lonato, the main favourites of the category will be the youngsters of Evokart, led by Leonardo Marseglia and Leonardo Caglioni, those of Giugliano Kart led byMattia Michelotto, and those of Gamoto Racing led by the BritishLuca Griggs. Strong races will also be awaited by drivers of the likes of Federico Cecchi of Morsicani Racing and Luigi Coluccio of Jolly Team.