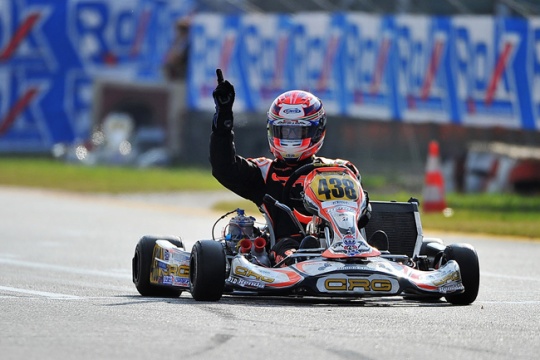 Press Release by: CRG
Giacomo Pollini, on CRG, dominated the Rok Shifter category of the Rok Cup International Final 2015. Team Gamoto to the fore in Mini with the finalists Griggs and Putera.
Giacomo Pollini, assisted by Renda Motorsport, literally “cleaned up” the Shifter Rok category of the Rok Cup International Final 2015 held at the South Garda Karting track of Lonato, claiming a spectacular win in the event that saw the participation of a total of 350 drivers.

GIACOMO POLLINI THE ABSOLUTE RULER
Giacomo Pollini, after shining in the last round of the Bridgestone Supercup with the fourth place, has dominated the Shifter Rok of the Rok Cup International and turned out to be the quickest of the 53 drivers on track. He posted the fastest time of his group in qualifying, won both heats, the Prefinal and has been the nearly unchallenged winner of the Final. With such an hat trick he did not leave any room to his rivals.
Among CRG drivers, a good result in Shifter Rok was also obtained by Andrea Tonoli, who recently won the Italian Prodriver Over Championship and was eighth in this Final, while Pierluigi Giglio ended 11th.

TEAM GAMOTO TO THE FORE IN MINI
Team Gamoto and CRG chassis managed to find a place in the final stages of the very tight Mini category that had 116 drivers at the start, with two very young drivers: Luca Griggs and Adam Putera. The two youngsters closed their effort respectively in P23 and P28, at the end of a solid weekend. After the third place in qualifying, Griggs was involved in an incident while leading one heat, which cost him a lot of positions in the final stages. Putera has been shining thanks to a comeback in the heats that made him recover from the 50th place he held after qualifying, to the group P10 that earned him access to the final. The recent winner of the Czech Republic title Dan Skocdopole could not find a place among the finalists instead; he had to settle for the sixth place in the Petronas Trophy race due to a series of inconveniences.

After the recent round of the Bridgestone Supercup where Team Gamoto has been again protagonist with the absolute P6 scored by Gabriele Minì, and this Rok International Final, the Italian squad will be back to the South Garda Karting track of Lonato this weekend for the 44th Trofeo delle Industrie. In the occasion, the team's lineup for 60 Mini will include again Luca Griggs together with Adam Putera, Cenyu Han, Alex Kattoulas, Bohra Nikhil and Nik Zamir.