The best of karting is yet to be seen
As the Italian karting fans, who have been living through quite a difficult time, already know, what I’d like to tell you is to keep your chin up, look ahead and yell out the love for karting that seeps through every pore of your skin. We’re still living a critical moment in Europe too, but at the same time there are clear signals to show that in some countries the sport is picking up. For example in the UK, where we have done a “special” report in this month’s issue and in Spain where they are reaping the best of what has been sown in the past 5 years thanks to regional policies aimed in investing in the sport and new drivers. Clearly, this was to be expected because the solution didn’t fall like manna from heaven, but it came as results of hard work, with promotional formulas aimed to draw more youngsters to this wonderful sport, karting. Unfortunately, not all the federations, Italian included, have managed to get involved in time to limit the damage due to an expected economic recession in the old continent with the advent of a common currency. Also the Cik weren’t able to see what karting was heading for…and the United States alone simply can’t be the universal remedy for all harm, especially for the karting industry. And yet, they still prove to have clear ideas restoring trust in the 100cc for another 4 years, showing that the engine is not really so determining for the success of a motoring sport such as karting. But we really didn’t need the traditionalist Americans to tell us.
Karting as a sport must be more open minded with different solutions that allow karters to really live this exhilarating experience. Anyone, even if with personal interest, ought to be given a chance to practice karting. A sport from which there shouldn’t be the slightest condition or prejudice. Karting today should reveal all the different aspects it represents. The aspect coated with international events as stage and important showcase, very important for bringing the sport and protagonist into the limelight, the same characters, in fact, that make the difference in F1. Like all extreme sport, karting too lives its requirements and enables anyone who practices it to challenge his personal limits, a fundamental aim for each and every one of us. Karting has this prerogative, but many have not realized it yet. Is the best of karting yet to be seen? 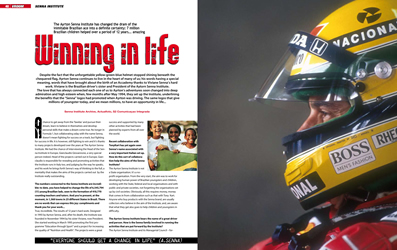 SENNA INSTITUTE – Winning in life
After Ayrton Senna’s death, the loss that unexpectedly hit the world in 1994, has over the years been transformed by the Sennas into an incredible font of assistance and charity work. Ayton’s sister, Viviane, has given life to an idea that the brilliant Brazilian driver had been thinking about for a long time and set up the Ayrton Senna Foundation and the “Instituto Ayrton Senna", associations that organise and finance educational programmes and formation of children and youngsters in Brazil. Daniele Leone  (Vroom Karting Magazine) and Gianclaudio Giovannone (Ayrton Senna Foundation) tell us about the incredible success that the institute in Brazil has been having since it was first set up 12 years ago. To date, the institute has changed the lives of 6,545,794 (!!!) Brazilian children and youths! It has offered training for 410,770 teachers and tutors who are present in 1,368 towns and in 25 Brazilian States. Here you can see the actual numbers as proof of the success that the institute has had in 2006 only: they have helped 1,326,794 children, 64,526 teachers have been trained, 12,035 partnerships have been set up with companies, schools, ONG and Universities. Over these past 12 years, more than 60 partnerships have been set up by the Foundation, and to these there are also 30 licensees. Out of the various collaborators we have: Audi, Credicard, Fedex, HP, IBM, Microsoft, Nokia, Samsung, Carclass, Sap, Mőet Chandon, Varig, Diadora, Hublot and obviously Sid Mosca, the well-known helmet designer who still today is responsible for aerographing the unique replicas of the unforgettable yellow-green-blue helmet. 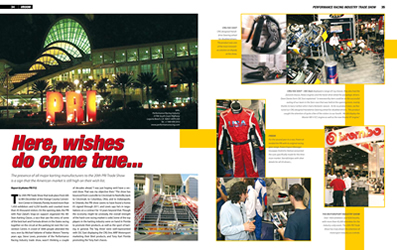 SPECIAL – PRI Trade Show
The trade show based in Orlando and organized by Steve Lewis’ Performance Racing Industry attracted the best in karting. A full five page report with photos and curiosities tells you all about the tree-day show, which was opened by the All-Stars Karting Classic race and saw the best drivers in the US fighting in front of 3,000 spectators. 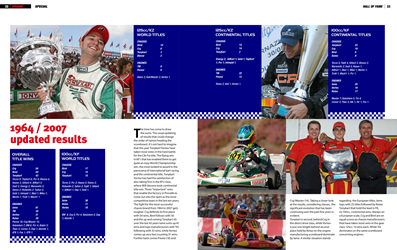 HALL OF FAME – 1964/2007 updated results
The time has come to draw up the sums. It is the usual updating of results that allows up to see the difference at the top of the scoreboard for various brands that have stood out over the 1964-2007 period. The battle is very very close for chassis brands. Crg defends its historic first with 54 wins with Birel to follow 50 and a stealthy threatening Tonykart with 43 wins. A battle that heats up with each year that passes... 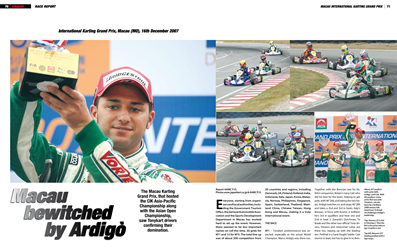 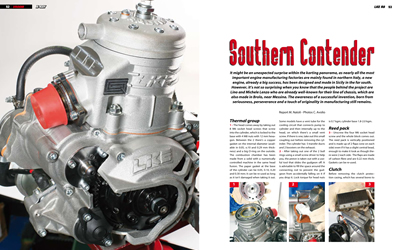 X-RAY – LK8 Lenzokart
Although it could be considered as a pleasant anomaly in the karting scene, an engine has been designed and made in Sicily and has already hit the headlines; strange seeing that most of the manufacturing industries are situated in the upper part of the Big Boot. However, knowing that the authors of this masterpiece are Lino and Michele Lenzo, already famous for their chassis, made in Brolo, Messina in Sicily will undoubtedly calm any doubting spirits, but the awareness of a product born from seriousness, perseverance and a touch of originality in manufacturing remains. 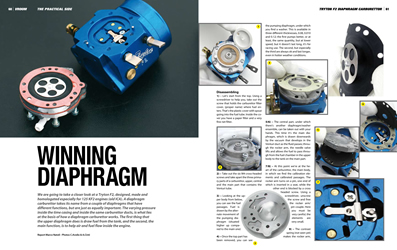 PRACTICAL SIDE – Tryton F2 Carburettor
We are going to look into a Tryton F2, studied, made and homologated especially for 125 KF2 (ex-ICA) engines. It’s a diaphragm carburettor, which gets its name from the two diaphragms present, each with a different function, but equally important. At the base of the functioning concerning diaphragm carburettors there’s variation pressure inside the timing case and the same carburettor duct. The first starts the upper diaphragm or pumping diaphragm and petrol is drawn from the tank, the second, called main diaphragm, helps air and fuel flow inside the engine. 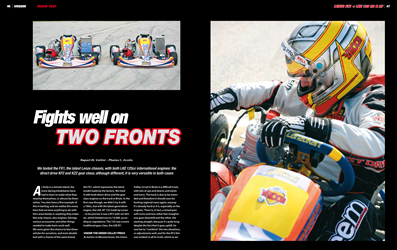 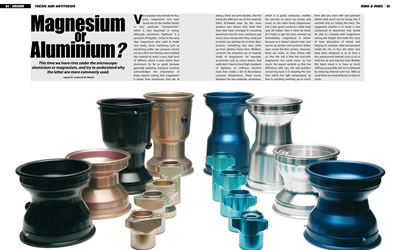 THESIS & ANTITHESIS – Rims & hubs
The debate in this issue is very interesting: is it better to mount magnesium or aluminium rims? Experience seems to underline the advantages of magnesium, although there are some sugestions that are worth bearing in mind. Silvano Pellizzon (A:M:V: Racing Kart) and Stefano Pozza (Wild Kart) tell us about the pros and cons of both materials, used for their own products. Here is just a bit of what they have to say. 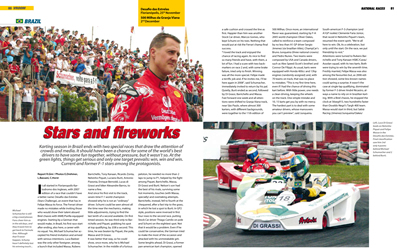 NATIONS – Brazil, Australia, England, Spain
Michael Schumacher dominates in Brazil at the Desafio das Estrelas, promoted by Brazilian Felipe Massa and Rubens Barrichello. Australia features the first 4H race in Melbourne with some of the nation’s top racing stars. Our correspondent from England reports on the first two rounds of the Winter Series, while Spain ends the 2007 season with the Copa de Campeones.

CARTOON – Here we are again
Tardy Braker and ZigZag are faster than regional champion in free practice... could it really be possible??