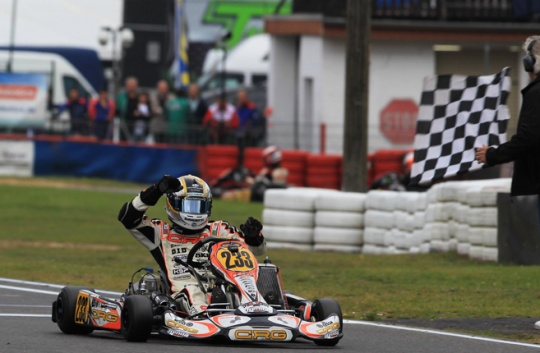 Press Release by: CRG
In KZ2 Davide Forè won the first final in Kerpen, but the Italian could not get the title. Stan Pex won race-2 claiming his first victory in the German Championship. Martijn Van Leeuwen and CRG Keijzer Racing close to the KF title.
It has  been a great final round of the DKM, the prestigious German Championship that has lived its epilogue in the fifth round of the season held at the circuit of Kerpen, after the races of Wackersdorf, Genk, Ampfing and Oschersleben.
CRG colors have been the absolute protagonists of this season, mainly in KZ2 and KF. Davide Forè and the new world champion Jorrit Pex, came to Kerpen in the fight for the KZ2 title, even if their chances to get the title off Schmitz were quite slim due to the jokers mechanism.

FORE’S CHARGE IN KERPEN
Davide Forè, on CRG-Tm run by Renda Motorsport, has tried to get the title until the end, securing the victory in the first final ahead of Schmitz, while the four times DKM winner Jorrit Pex had to settle for the fourth place ahead of the Dutch Dylan Davies of team CRG Keijzer Racing.
In Race-2, Jorrit Pex's brother, the young Stan Pex, managed to take them all and, after ending race-1 in P11, put in a great run claiming the win on the CRG chassis managed by team Pex.
Davide Forè took another podium in P2, but Schmitz secured a place on the third step of the podium and clinched the victory in the German Championship, with a 8 points lead on Forè. The third place of the classification was obtained by Jorrit Pex, as Davies was fourth, which made three CRG drivers in the top four of DKM. Top ten finish also for Maik Siebecke of SRP Racing Team who was sixth, as Daniel Stell of TB Motorsport was seventh, Stan Pex eighth and Fabian Federer tenth.

Davide Forè has been the most victorious driver of the DKM season as he claimed three wins (a double win in Ampfing and one in Kerpen), while Schmitz won two races. One victory each went also to Jorrit Pex (Genk), Davies (Oschersleben), Siebecke (Wackersdorf) and Stan Pex (Kerpen), as the latter secured his first win in DKM.
The comment of Davide Forè: “I am happy anyway on the results I obtained this year in the German Championship. This was the first time I have taken part in the whole championship and I have been in the title fight all the way to the final race of Kerpen. I won three times out of ten, I have led the charts in the mid part of the championship but unfortunately the incident in the penultimate round of Oschersleben has been crucial. I would like to thank CRG and team Renda for all the support they gave me.”

VAN LEEUWEN PROTAGONIST IN KF WITH CRG
CRG has been close to the KF title too with the Dutch driver Martijn Van Leeuwen of CRG Keijzer Racing, who won the first final in Kerpen that was his fourth win of the season, but had to settle for a P2 in the second race behind the championship rival from Holland Verschoor. The latter secured in this way the title with a 5 points advantage. Mandatory jokers played against Van Leeuwen, but his season has been positive anyway as he obtained four wins and five second places in the ten finals run.
In KF Junior the Dutch Max Tubben obtained the fourth place in Kerpen's race-1 and the eighth in race-2. Thanks to this result, the young driver of CRG Holland ended sixth in the final standings.
Top ten finish of KF Junior for his team mate Max Weering, who was ninth in the final classification.

All results and classifications are available at www.kart-dm.de/startseite/