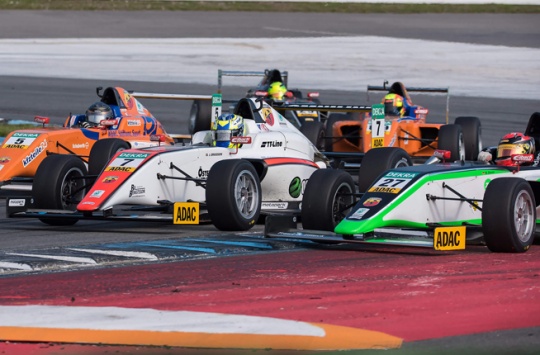 Press Release by: P1 Racing Services
A highly controversial drive-through penalty deprives Joël Eriksson of his last championship hope in the German Formula Four series. Team principal Timo Rumpfkeil believes the penalty in heat one of the championship’s final event is grossly unfair.
Joël Eriksson knew what was at stake. Hence, the Swede piled on the pressure right from when the lights went out. "I was pushing really hard because I knew that I so needed a win to keep my championship hopes alive," said Eriksson. Soon, he moved up to second and then into the lead past his arch rival for the title, Marvin Dienst. "That’s when the unfortunate battle unfolded,“ recalled Eriksson. "I shut the door on him, and he ended up behind me. I was handed a drive-through penalty for my move, but I still believe it was a fair fight."
The drive-through sent Eriksson out of the points and thus robbed him off any hope to still catch Dienst in the remaining two heats of the Hockenheim weekend. "We set out to win the title. By earning a drive-through in heat one, we were deprived of this opportunity, and we even got in danger of losing second place overall," said team principal Timo Rumpfkeil. "Taking into account our penalty at the EuroSpeedway Lausitz earlier in the season, it’s fair to say that we didn’t lose the championship on the track. I cannot agree with the stewards’ decisions at all. While I knew it’s a very tough job to keep an eye on 30 young drivers, we need more accuracy and consistency – especially when the top guys are being investigated."
By finishing eighth and third – after having started 14th – in the last two races, Eriksson at least secured second place in the final rankings of the overall leaderboard.
Michael Waldherr earned himself the unofficial title Unlucky Dog. The young German once again missed out on a highly deserved podium finish due to bad luck – as happened so often this year. At Hockenheim, he improved from 16th to eighth in race one. He then held third in race two only to be pushed off by a rival three laps from the end. Before that, he had to retire from race two due to a blocked radiator, courtesy of an off in hairpin. He finished 11th overall. "The hairpin didn’t seem to like me at all this weekend", he said. "In heat one, a car spun in front of me. I had to take avoiding action and lost a number of positions. But I could claw back quite a few of them. In heat two, I got pushed off in the hairpin and spun."
Jannes Fittje’s car fell victim to a fire which started in the wiring loom on Thursday, forcing the team to build an all new car from scratch with a fresh monocoque. Fittje qualified 16th but got a drive-through in heat one, demoting him to 24th. In race two, he finished 16th – and then he retired two laps from the end in the final due a technical breakdown. Nevertheless, the German finished his maiden year in single-seaters fourth overall.
Jonathan Cecotto secured fifth spot in the rookies’ championship. The Venezoelan finished 11th in heat one, ran into spun competitor in front of him and retired in race two and took the flag as 23rd, after he ploughed through the same gravel trap as team-mate Waldherr, in the final.