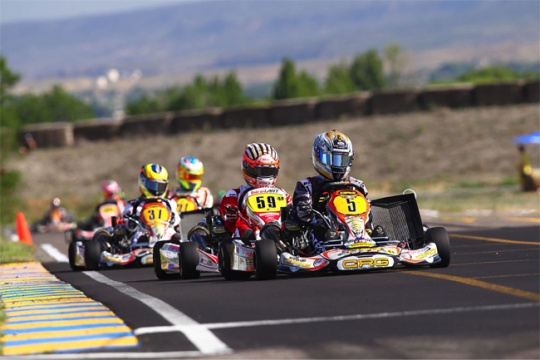 Press Release by: MAXSPEED GROUP INC.
With dates announced back in June for all 2016 MAXSpeed Entertainment promoted events, the largest karting promotions company in the world is pleased to announce today tracks and locations for the entire schedule.
Making stops at familiar and popular standbys, the 2016 schedule will also feature new, exciting venues for the MAXSpeed program on both the East and West Coast.
"We have most of our contracts complete, minus some minor details, and we are pleased to get this information out early so our dealers, teams and drivers have ample time to plan their year,” explains MAXSpeed Entertainment’s Director of Promotions Garett Potter. “We have secured venues on both coasts, and are looking forward to a new and exciting season after the US Open finale in Las Vegas in late October. We did have to make one date change. The first round of the US Open has been moved one week earlier to April 21-24. The Zurich Classic PGA tournament, located one mile from the track, posed a conflict on the original date. While we could have still run, we found it to be in the best interest of all parties to move to the weekend before.”
Starting with the ever-popular Florida Winter Tour series, the opening rounds will return to the ultra-fast Homestead Karting circuit, set in the shadows of the famed Homestead-Miami Speedway in Homestead, Florida. From there, the series will head to the picturesque Ocala Gran Prix in Ocala, Florida, where drivers will tackle the popular tight and twisty track. The series will then conclude at Palm Beach Karting, host to multiple FWT events in year’s prior, in Jupiter, Florida.
“After a successful 2015 season with the ROK Cup USA and Rotax MAX Challenge line-up, we can’t wait for January to see the numbers grow,” continues Potter. “I want to thank Homestead’s Tony [Schroeder], OGP’s Jorge [Arellano] and Troy [Mitchell], and PBK’s Andre [Martins] and Mario [Pazos] for all their help in keeping this worldwide winter program growing.”
Following the Florida Winter Tour, the second season of the US Open series will open at the largest karting track in the US and site of the 2013 Rotax MAX Challenge Grand Finals, NOLA Motorsports Park in Avondale, Louisiana, approximately 20 minutes from downtown New Orleans. The US Open series will use the full course at NOLA to make one of the largest track configurations on the circuit.
“I’m very happy to be heading back to NOLA,” adds Potter. “With its central location, incredible facility, staff and dedicated kart community, I could not think of a better place to kick off the US Open season. Special thanks to Robbie [Poupart] and all the staff who helped put this agreement together. I can't wait to see everyone!”
Round two will take place at the state-of-the-art Miller Motorsports Park in Tooele, Utah, which is located 35 minutes from Salt Lake City.
“We are excited to be part of the rebuilding of MMP,” Potter explains. “I think we were all a little worried after the news this year, but with the help of Alan Wilson and Tooele County Larry’s dream is still alive, and we are happy to be a part of it. I would also like to thank Scott Clark and the team at Msquared Karting for helping put this race together.”
The series finale will again conclude in high style at the Rio All-Suite Hotel and Casino, just off The Strip in Las Vegas, Nevada.
The pinnacle Rotax event in the US will be featured at one of the top karting venues in the US, the premier West Coast facility Simraceway Performance Karting Center. Nestled in California’s wine country on the grounds of the Sonoma Raceway, the 2016 United States Rotax MAX Challenge Grand Nationals will provide American drivers an opportunity to gain tickets to join Team USA at the Rotax MAX Challenge Grand Finals.
“Customers have been asking for this for many years, we are excited to be heading to Sonoma,” concludes Potter. “KC [Morrison] and his crew are not new to hosting large karting events, and they are more than ready to host the 2016 Grand Nationals.”
More details will be coming in the next few weeks on host hotels and paddock parking, and look for registration for the 18th running of the international Florida Winter Tour to open November 9, 2015.
2016 MAXSpeed Entertainment Schedule