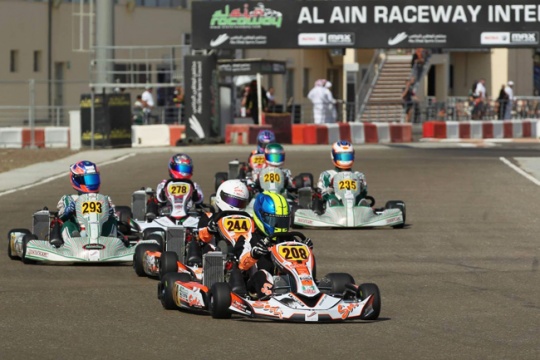 Press Release by: Sodi Kart
Sodi Racing Team Middle East drivers got their first taste of Rotax Max racing action of season at the non-championship Al Ain Invitational race day on Friday, 25 September…
... which provided an early indication of what can be expected in the months ahead - all indications are that a tough season lies ahead.
Micro Max Class: Qualifying
Sodi's 'new boy' Georgie Zouein managed to finish fifth behind the very fast Ali Al Shamsi from Daman Speed Academy driving the same chassis and getting pole position.
Rookies Archie Sampson managed eighth and Luis Velasco 11th. Diaraf Keinde was 10th.
Micro Max Class: Heat 1
A total of 14 Micro Max drivers came under starting orders and Zouein charged from fifth into the lead, with a consistent showing and putting down a marker his the year ahead.
Newcomers Sampson and Velasco, making their Rotax debut, showed consistent pace and overtaking skills to make their way up the field finishing 7th and 9th respectively. Keinde did not finish the race.
Micro Max Class: Pre-Final
Zouein kept his momentum with top spot finish in the pre-final, while Keinde recovered from the back of the grid with an impressive showing to claim fifth. Sampson was 9th and Velasco 10th.
Micro Max Class: Final
It was disappointment for Zouein who did not put a foot wrong all day, but a couple of incidents in the Final, including a coming together with Keinde cost the Sodi pair a certain podium.
Velasco and Sampson kept out of trouble all day long, and in the final their consistency was rewarded with 5th and 6th respectively - the only two rookies in the field managed to finish ahead of some 'seasoned' Micro Max campaigners.
Mini Max Class: Qualifying & races
The sole Mini Max driver using Sodi was Khaled Saab, who was one of the sensations of last season's Micro Max class and graduated to Mini Max. A new adventure and steep learning curve beckons for the talented youngster who qualified ninth and worked his way to sixth in Heat 1. He stayed there in the Pre-Final and also until the chequered flag dropped to end the Final.
Junior Max Class: Qualifying
Sodi trio Logan Hannah, Enzo Fontanella and Eliot Jones worked together as a team during qualifying and as a result lined up 6th, 7th and 8th respectively on the grid - a mere half a second off the top pace. The Junior Max promises to be a very close contest this season.
Junior Max Class: Heat 1
Although Hannah dropped down to eighth she recovered well and set the second fastest lap of the race only bettered by Junior Max favourite and pace setter Taymour Kermanshachi.
Fontanella rose to the occasion in the race and made his way up to fourth after a race long battle with the leaders. Jones managed 7th, also battling at the sharp end of proceedings.
Junior Max Class: Pre-Final
There was little to separate the juniors as less than a second separated the top ten lap times. Fontanella was in a four way battle for second place from which he merged in third and Jones fourth, with Hannah not far off in seventh.
Junior Max Class: Final
After starting the final in fourth Fontanella capped his best showing to date in Rotax Max with an impressive second place in a well calculated race.
Jones was involved in the 'Battle of the Day", with side-by-side racing through just about every corner of the 12 lap final, with a posse of determined young drivers including pre-season favourite Tehmur Chohan.
In the end Jones had to settle for seventh, but at ones stage fourth was very much in his sights. This battle among the junior contingent is likely to be one of the highlights of the Rotax Max season.
Hannah was on the pace throughout the day, but luck was not on her side and 10th was her reward for her efforts on track.
Senior Max Class: Qualifying
Sodi newcomer Abigail Birch stunned the Senior Max contingent by claiming pole position ahead of fellow Sodi drivers Fraser Rose and Jan Richtermeier - suggesting that Sodi have a potent line-up for the season ahead.
Senior Max Class: Heat 1
The pace in the first race was electric, with Rose managing to edge ahead to take the win followed by Birch in second and Richtermeier fourth.
Senior Max Class: Pre-Final
The second race was tough and Pasqual Pook, the driver to beat in the Senior Max class this year, took victory with Rose chasing hard in second. Birch dropped to fourth and Richtermeier fifth.
Senior Max Class: Final
Despite a relatively small Senior Max field there was little to separate the pace setters and it was Birch who made up most ground by turning fourth on the grid to an impressive second overall.
Richtermeier also bounced back from fifth at the start to claim the final podium spot at the end of the day. Rose suffered technical issues, but he soldiered on to claim fourth.
Nicolas Fargeas, head of Sodi racing operations for the team:
"Overall a good weekend for our team and very promising for the rest of the season. The team is ready and it seems that the new evo engine with the new Sigma RS chassis is a good match."
"Great job from all the team putting together a lot of effort with a new structure and organization for race weekends. We expect a very exciting season and the whole team are looking forward to it," concluded Fargeas.
Sodi Racing Team ME return to Al Ain Sportplex for the opening round of 2015-2016 UAE Rotax Max Challenge on Friday, 9 October 2015.