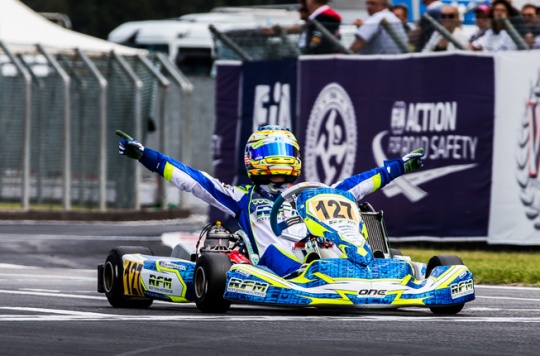 Author: Vroomkart International
The USA driver dominates the final with a lights-to-flag victory!

Logan Sargeant (FA Kart/Vortex) is the second driver from the USA to ever win a World Championship. After Lake Speed in 1978, the American flag had never flown at a CIK-FIA World Championship.
Second consecutive KFJ World title for Ricky Flynn Motorsport team, who can rejoice also for Worship's 4th place at the flag.
Hotly contested 2nd place for Tony Kart Racing team driver Clement Novalak who has the better of Brazilian Caio Collet in the end.

Fantastic race for P4 among De Pauw, Drugovich, Lundgaard (amazingly up from 16th on starting grid, Petvor, Fernandez (dropped to 9th at the start) and Worship. De Pauw would drop back on lap 6, Drugovich on lap 11 touched hard by Fernandez. The last half of the race is riveting, with Lundgaard making to 4th ahead of Petrov, Fernandez and Worship. In the end, it will be a faster RFM driver to snatch 4th, with Fernandez, Petrov and Lundgaard in tow.