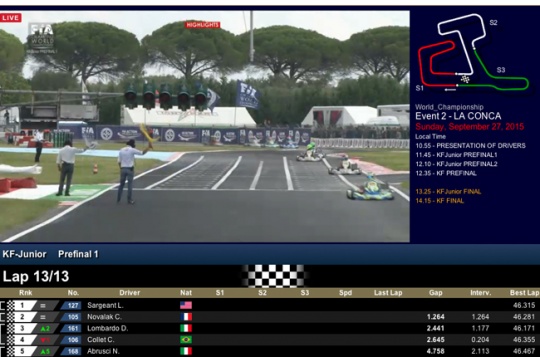 Author: Vroomkart International
Utter domination by the American in prefinal 1, with the second plenty of action and overtakes.
To say that Sargeant has a walktrhough is an understatement, as the RFM drivers keeps the group at over 1" for the entire race. Behind him, Novalak, Lombardo and Collet fight for position.
In the second prefinal, a lot happens in the first few laps. Fernandez keeps the lead for a few laps but he's under huge pressure by Drugovich and De Pauw. The Brazilian manages to move past, shortly after followed by the Belgian, who passes him in the same lap for the lead.
Fernandez retaliates the following lap shadowing De Pauw, who has to give in on lap 7.
Then positions set, with DR Racing Artem Petrov making a superb comeback from p9 to p4 harassing Drugovich for the last 4 laps.

Sargeant and Fernandez will start the final from the front row, with Novalak and De Pauw on row 2.
Disaster for Roosens (from 15th to 30th) Milell (from 12th to 31st) Carrara (from 5th to 30th) and Maini (from 14th to 31st) all out of the final.