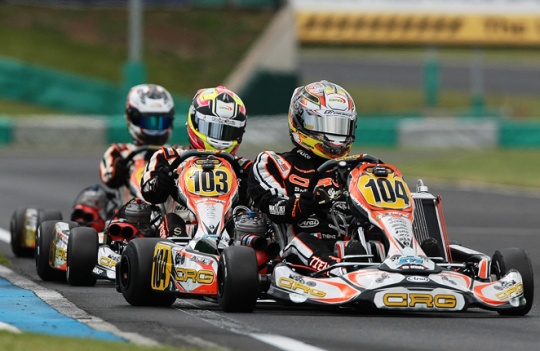 Press Release by: CRG
Felice Tiene is ready to repeat the result of 2012. Pedro Hiltbrand is motivated to get back the role of protagonist of the season…
... Davide Forè, the most victorious driver with four World Championship won and three World Cups, will be on track too.

After the spectacular success of CRG at the KZ World Championship in Le Mans, the Italian outfit and its drivers will get on track for the final world appointment of 2015: the International karting will get on stage in La Conca (Muro Leccese, Italy) next 24 to 27 September with the KF and KF Junior World Championship.
In Le Mans, the young Dutch driver Jorrit Pex awarded CRG with its 12th KZ World Title and made the Italian outfit reach 39 titles in the World Championship in direct drive categories. The hunt for the 40th world title in the history of CRG is open in La Conca!

THE PROTAGONISTS OF KF
CRG will line up Felice Tiene in La Conca. He won the 2012 KF2 World Cup (the current KF), in the stunning one-two-three in Spain at Zuera, where he topped his two team mates of the time, Max Verstappen and Jordon Lennox-Lamb.
Alongside Felice Tiene, the Spaniard Pedro Hiltbrand will also be on track, and will be very motivated to take the win after just missing out in the KZ2 European Championship and in the CIK-FIA KZ2 International Super Cup in Le Mans, despite being the main protagonist of both events.
The young British driver Archie Tillett, the Japanese Tougo Suganami and the other British Harry Webb, who won the 2012 edition of the World Rotax Grand Finals, the Rotax Euro Challenge Junior and the Rotax Euro Challenge Senior 2014, will also be on track with CRG.
Team CRG Keijzer Racing will take on track in KF the strong Dutch driver Martijn Van Leeuwen instead.

THE VETERAN DAVIDE FORE’
Among the main protagonists of this race, CRG works team will also bring on track Davide Forè, the most victorious driver still in activity. He has four World Championships under his belt in FA and FSA (1998, 2000, 2004, 2006) and three World Cups in FSA (2000), Super ICC (2006) and KF1 (2008). Davide Forè, who turned 41 last July, run his first World Championship back in 1993. “I remember that I just finished with school - said Davide Forè – and a few months afterwards I run my first world championship in France at Laval in Formula A. My objective is to win again, it would be great to add another CIK-FIA cup to my showcase. This year I am also in the hunt for the victory of the KZ2 German Championship that will end in Kerpen next 4 October. We will see, I will give it my best shot... What I have achieved in more than 20 years has been really gratifying, but I love so much what I am doing that I never get fed up. I will continue to race to win until my body, CRG and its President Tinini will allow me to.”

CRG YOUNGSTERS IN KF JUNIOR
CRG will be represented in KF Junior by the young and quick British driver Alex Quinn who will get on track with the works team in his second world championship after the great race of Essay last year, while  Team Gamoto will lineup the Malaysian driver Bin Abdul Jafar Muizzuddin, CRG Keijzer Racing the Romanian Nicholas Pascu, and CRG Holland the Dutch Max Tubben.

Results, Live Timing and Live Streaming services will be available at the website cik-fia.com and cikfiachampionship.com