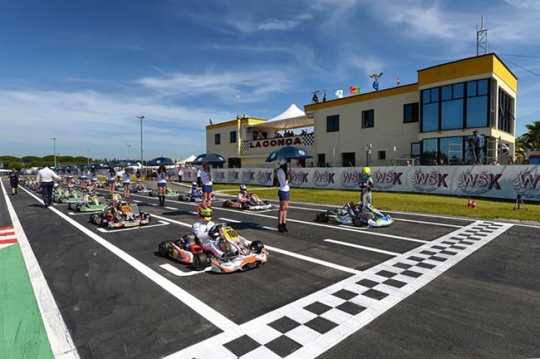 Press Release by: FIA Karting
In the south of Italy, the home of WSK Promotion, the CIK-FIA World Championship for the KF and KF-Junior categories will take place this weekend.

Although the Italian circuit has been mastered perfectly by the teams, it has enough technical difficulty that the role of the Driver is still predominant. Therefore expect to see a high quality sporting event in for which serious predictions are impossible to make. After testing, the Drivers are already on site for the upcoming big go-kart show, from 24th to 27th September, 2015.

Well-known to the major Italian and international teams, the La Conca International Circuit has been used to host major Competitions like the World Championships in 2002, 2004 and 2008. The track at Muro Leccese also hosts many international races every season. It is mostly familiar ground for the 167 Drivers in the quest of the two world titles remaining in 2015. This will be the last meeting at this level for both of the categories in contention, KF and KF-Junior, which will be replaced in 2016 by the new OK and OK-Junior.

KZ, KZ2 and the Academy make their debuts in Adria

FIA Girls on Track, the winner will be announced tomorrow - Let's discover the finalists